Someone asked for exclamation points so here are four !!!!

Today is Genoa day for AMD and it is as fast as you have heard. For this article, SemiAccurate will focus on what, SKUs, pricing, and a bit of analysis, not the tech.

The short story is that Genoa is AMD’s 96-Core successor to the current 64-Core Milan server CPUs. Genoa is a hybrid die based on 5nm CCDs (Core Complex Die) and a 6nm IOD (I/O Die) vs Milan’s 7nm CCDs and 12nm IODs. If you are thinking 50% more cores, several shrinks, and a new Zen4 core design will mean a massive leap in performance, you would be right. And that is before the uncore bits like DDR5, PCIe5, and CXL. Lets dive right in with the SKU list. 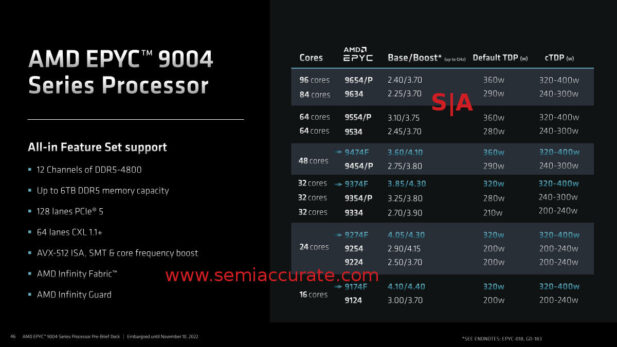 There are a few things that stand out, most notably the core count and wattage. Core count goes up 50% from 64 to 96 and the top TDP goes from 280W to 380W. These are both big changes and that peak wattage means things go over the hump from air coolable to air coolable with a lot of pain and engineering effort but you really should liquid cool it if you are sane. That said it can be done. 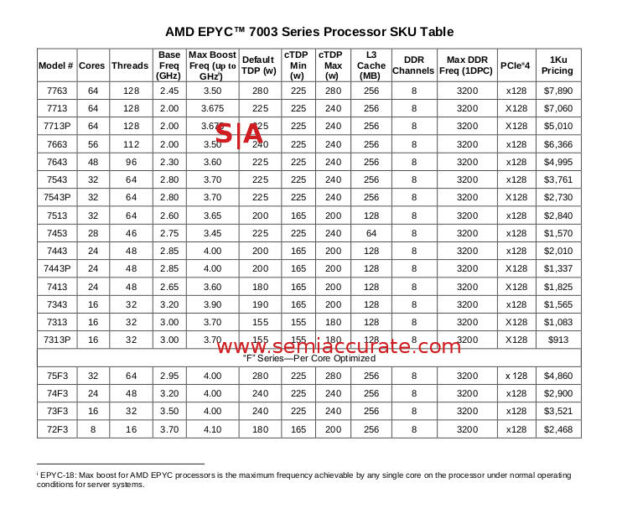 Out with the old Milan

In with the new Genoa

Now comes the elephant in the room, pricing. At first glance the top Genoa raises MSRP by almost $4000, $3915 to be exact, an almost 50% increase to match the 50% core count bump. Some would say this is fair, others will say that it basically relegates the benefit of a new architecture to the IPC increase of the CPU. Both are correct but the real story is further down the stack.

As you keep going down the stack, things start looking more and more odd. The top 32C Genoa, 9354, costs $3,420 which is cheaper than the top 32C Milan, 7543, at $3,761. In short the high end got higher, the mid-range stayed the same, and the low end got lower. What does all this mean? Good question which varies by what you do and how much power costs where you are. Most buyers of pedestal servers won’t need anywhere near 2x 96C CPUs so they might see a break. In reality that crowd should wait for the small Genoa socket parts.

All this said there are two takeaways. First Genoa is not going to significantly change the price per core as you would expect it to have done. This is actually a much larger shift for AMD than most expected given their rather customer friendly pricing moves over the last three generations. It may not be as customer abusive as some of Intel’s moves but it drastically reduces the value proposition of this new generation, at least compared to what it could have done. As an aside, AMD did not release pricing during the briefings for Genoa, they waited until a few days before the launch for that.

Then there is the elephant in the room, once again it is pricing. The numbers you see above are MSRP which if you are buying consumer goods are a fair representation of what you can expect to pay. On the volume CPU front, especially to hyperscalers and other large customers, MSRP is about as relevant as a politician making pandering promises to a core base of supporters. Given how supply constrained AMD is at the moment and how close the competition is, there isn’t much pressure to make sweetheart deals. That said don’t expect AMD to actually get anything close to these list prices but margins should be a lot better this time around. 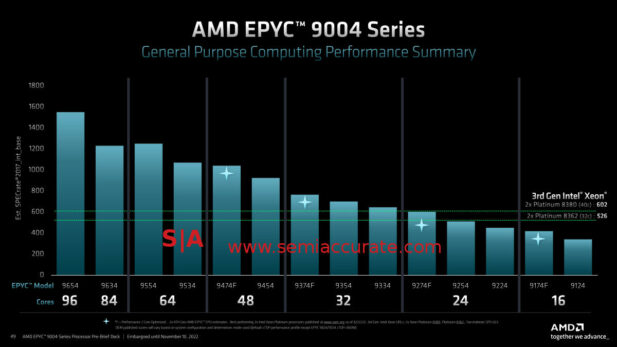 How does Genoa perform?

That brings us to performance. For months now SemiAccurate has been saying that Milan is going to crush Intel. Sapphire Rapids is quite the step up from Ice Lake but it is also about two years late. Sapphire was meant to compete with Milan, AMD’s last generation, and it beats it by a little. SemiAccurate published the numbers for Milan a few days ago.

As you can see, the top Genoa stomps the top Ice Lake in SPECInt_Rate 2017 (SIR17), 1500+ compared to 602 for Ice Lake (Note: We found slightly higher numbers for Ice but nothing significant and don’t think AMD is doing anything underhanded here). Sapphire Rapids has 50% more cores, higher IPC, and more features than Ice but not enough to close the gap to Genoa.

Yesterday Intel did a preemptive PR stunt for Sapphire with HBM and concentrated on accelerators and non-core performance. This wasn’t by accident. At Innovation a few weeks ago, they similarly offered select press the opportunity to benchmark Sapphire Rapids but only to test the accelerators and only with an Intel approved benchmark list. No independent tests or general systems tests like SIR17 would be allowed. Curious, eh? Most said they turned down the ‘opportunity’.

So what do we have in the end? Genoa is a massive leap in core count, TDP, and per-socket performance. 50% is the bare minimum here, clocks go up, IPC goes up, AVX-512 helps in a few cases, and the rest of the system is greatly improved. More on all of this in another article, as we said this one is just about the ‘what’ not the ‘how’.

Pricing is a mixed bag, the one metric that most of the large consumers care about does not change the value proposition by much on the high end but helps a little at the lower end of the SKU stack. Until the volume pricing leaks, about all you can say is that AMD looks to be taking a bit more margin than before and is possibly giving Intel a bit of breathing space for Sapphire Rapids.

Overall though, on a raw performance basis, Genoa is a clean kill. Nothing comes close, that 50% core count increase is simply crushing to anything out there and on that basis is nearly as massive a generational change as the Naples to Rome jump. The competition has no answer for years.S|A