Qualcomm phones it in for the Snapdragon Series-8 Gen 1

When you don’t have it, use infographics

Qualcomm’s ‘Tech’ Summit is once again lacking in the tech but this time the problem trickles down to the hardware as well. SemiAccurate is sad that the once leading SoC developer has now become a ‘me too’ without any worthwhile differentiating features.

What are we talking about? Qualcomm is now releasing their new 8-Series Gen 1 CPU/SoC (S8G1), a rebranding that we can’t actually criticize much. The old numbering scheme, even in it’s inflated final few iterations, had lasted for the better part of a decade and ran out of space for the two digit model numbers. Going to an upward counting, open ended scheme, Gen 1/2/3 etc seems smart to us. That said it will be interesting to see how they handle the inevitable non-full generational releases. All in all the X-Series Gen Y format is pretty solid.

Unfortunately you can’t say the same for the hardware. Several years ago Qualcomm had an unquestioned lead in mobile CPU and GPU development and they pissed it all away. Intentionally. It was painful to watch. The world class CPU core team was put on a different project, servers, and when that was shuttered they effectively disbanded the team. The shattered remains were a pale shadow of what they were but the problems didn’t show for several years. That would be about now if you didn’t get the earlier hints.

In the intervening years, Qualcomm used vanilla ARM cores but modified them in useful ways to make up for the lack of their own cores. They used the same cores that everyone else had but tweaked more than enough to make a serious difference in several key performance areas. Coupled to a best in class ISP, GPU, and AI/DSP block, the results transcended their pedestrian parts. All was good or at least the widening cracks were papered over sufficiently.

Then for some reason SemiAccurate can’t explain, Qualcomm proceeded to piss away their GPU leadership as well. Why? The unofficial word friends on the inside told us was the company felt they were so far ahead that they didn’t need to invest in the program. In case it isn’t obvious, we don’t feel this was a smart move but as you can see from the benchmarks, the unassailable lead Qualcomm had on this front has diminished over the years. They are now at the point where they are more or less tied with those offering vanilla ARM/Mali or Imagination GPU blocks, just one of the crowd. It is again painful to watch.

This frittering away of their leadership position is somewhat backed by their leadership in comms, especially 5G for the last two generations. Despite the rhetoric, most of the other key players have more than adequate 5G modems now but Qualcomm still leads. On paper Qualcomm can show lots of things that are ‘better’ than competitors but in the real world you would be hard pressed to show any difference with the upcoming generation of parts. This leaves Qualcomm without any real leadership features for their SoCs and brings us to the new parts, tepid though they may be.

Before we go there, there is a lot more SemiAccurate has to say on the subject but they partially cross into embargos at a later date so we will hold off on that part until we are sure we won’t violate any agreements. That said don’t believe the hype about the bright future Qualcomm is promising for their development process, it is still heading in the wrong direction and accelerating rapidly.

On that happy note lets talk about the new Snapdragon 8-Series Gen 1 CPU, basically eight vanilla ARM cores, four small A510 cores at 1.8GHz, three A710s at 2.5GHz for the big cores, and one X2 at 3.0GHz for the prime core. If it sounds like what everyone else is offering this generation, you are right because it is. Qualcomm has the volume to command access to bleeding edge process wafers in sufficient volumes but other than that they have what everyone else has, and that is a damning statement if you look at where they were just a few years ago.

For the rest of the SoC there were buzzwords aplenty and a truly pathetic tech-free tech brief. Qualcomm screwed SemiAccurate on the main briefings then did not grant our request for an actual technical brief even though we asked multiple times. Then they directly lied to SemiAccurate but that is part of the story covered by a later embargo.

The ‘pre-brief’ we did get truly achieved both parts of it’s name but that wasn’t the painful part. How would you conduct a technical briefing for the world’s press? Show them the usual joke of a ‘block’ diagram below to kick things off? Actually they didn’t get _THAT_ technical which should worry you, they literally didn’t give out so much as a block diagram or mention the cores or clocks, only that is was built on a 4nm process. 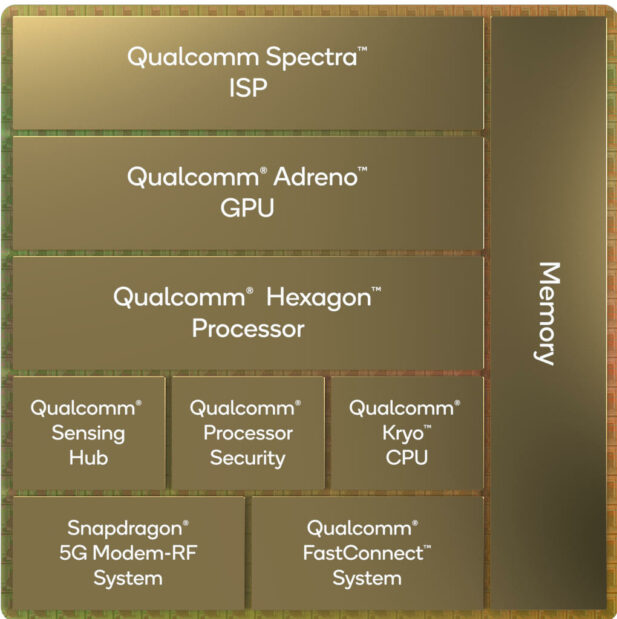 The height of Qualcomm’s technical explanations

That brings us to the “meat” of the “tech” Qualcomm has to offer us this time around. There were four infographic slides, no we aren’t joking, and that is about it. Painful doesn’t begin to describe the lengths they went to in order to avoid saying anything useful or tech related, just how awesome it was and how much better it would make our lives. When you don’t have it, wave shiny things in front of the press then deny them the ability to get the real story. Hopefully most will be to afraid to buck the party line and repeat what they were told even though they know it is wrong. Without further ado, we present those four infographic slides for your ‘enjoyment’. 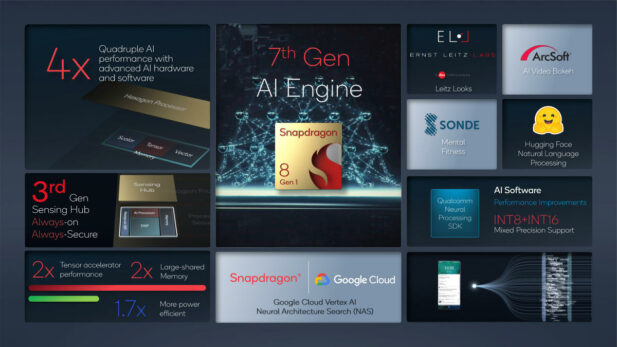 All the AI ‘tech’ they talked about 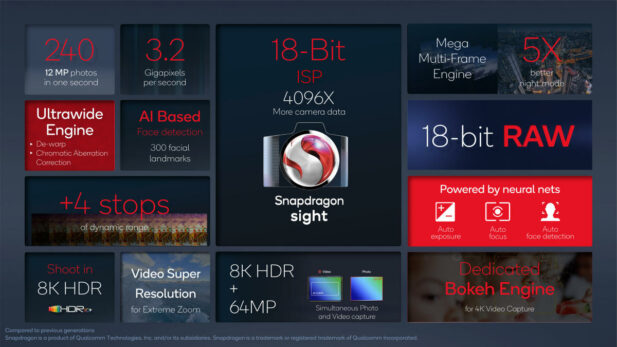 All the camera ‘tech’ they talked about 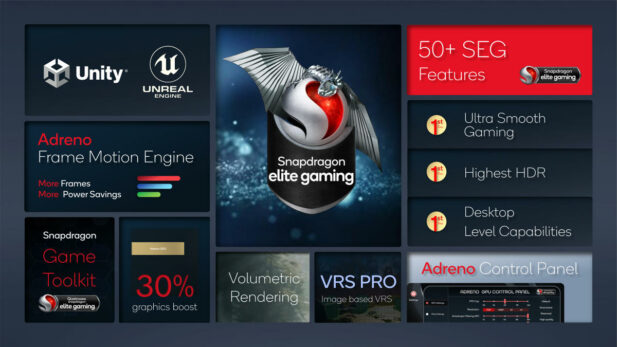 All the gaming ‘tech’ they talked about 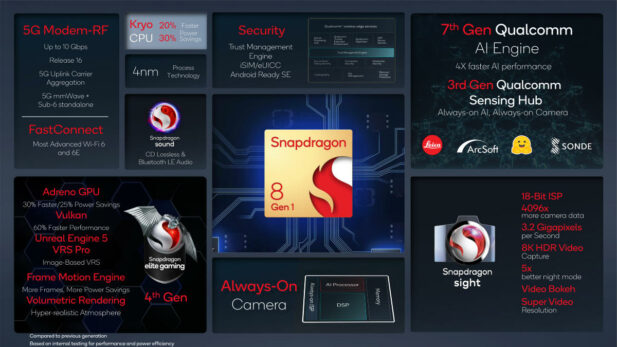 And finally the ‘hardcore’ ‘tech’ of the brief

As you can see, Qualcomm really doesn’t want to talk about the tech, just the ‘benefits’ it will bring. The reason for this is that the Snapdragon 8-Series Gen 1 has most of the same components that the competition does and for the first time those non-Qualcomm parts can often better the once class leader in several ways. The lead the company had is gone in most areas and diminishing fast in others but those kinds of slogans are unlikely to make it into the marketing materials.

If you are getting the idea that SemiAccurate thinks the 8SG1 is a bad part, it isn’t, it just isn’t a good part. Part of our annoyance is that Qualcomm intentionally destroyed their unquestioned technical lead in most areas and it was painful to see as it played out. Now that the results are becoming visible in silicon, well it is no less painful. At least it can’t get worse, right? Due to embargos we can’t comment on that right now but stay tuned, the pain does indeed get worse.S|A