Why did Marvell buy Inphi?

Look at where the market is going and it makes sense

Last week Marvell purchased Inphi much to the puzzlement of most onlookers. SemiAccurate dug in to the deal and it became clear why the purchase was made.

Lets start out by saying we aren’t going to write anything about the financial side of the Marvell/Inphi deal because we really don’t care about that. We will look at the tech and why we think Inphi is a really good fit for Marvell and it’s business model of semi-custom SoCs and devices.

The idea is simple, Marvell has a lot of IP and makes chips for customers that can’t or don’t want to do it themselves. The more IP Marvell can bring to the table, the better chance they have of winning a particular bid. With that in mind what does Inphi bring to this particular table? 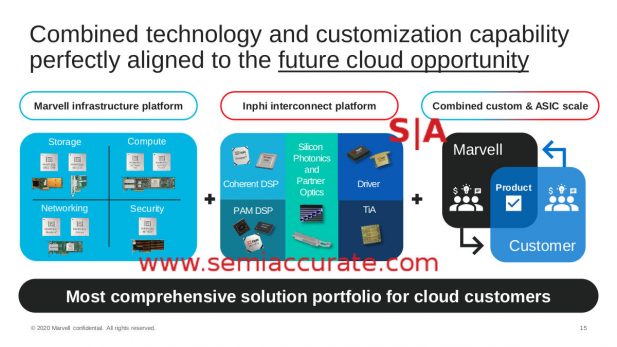 All the pieces of an optical module

As you can see in the Inphi box in the middle of the slide above, there are five things featured that all point to a single product. The DSPs are used for optical interconnects, PAM for shorter range like within a datacenter, coherent for long range like between data centers, think meters vs kilometers. The other three items are more or less what you need to build an optical module for 100Gbps or higher switches and interconnects. Inphi makes the silicon, the optics, and everything else needed to make a module but not the module itself. In short they are a one stop shop for all the components those optical module makers need to do their jobs.

Marvell has most of the important IP for a chip or SoC itself but not much for the stuff that connects those boxes up. Since 100Gbps and higher Ethernet is going to be optical, this is a growth market. More importantly in the near future, Ethernet is increasingly becoming an on-chip feature, Habana and Google are both putting it on their latest AI chips. Doing this electrically is fine for now but as speeds climb, it will be going optical.

This trend of optical for speed and Ethernet on device for latency, cost, and bandwidth almost guarantee that optical will have to move directly on to the chip. Intel has been showing this for years as have others, but precious little has made it to the market in a real device. The first step will be optical on package, basically putting a discrete laser and waveguides under the heatspreader but the eventual goal is to have it literally on the device’s die. This is a massively challenging technical undertaking but progress is being made.

So Marvell bought Inphi so they will be ready for this eventuality. If you buy your datacenter SoC from Marvell, wouldn’t it be nice if all your other chips were guaranteed to play nicely together on the network? As pitches go this one is pretty decent, and the ability to put first in class optical interconnects on a device could simplify the lives of datacenter denizens while taking a bite out of TCO. That said datacenter oriented devices aren’t the real killer app for the Marvell/Inphi combination. 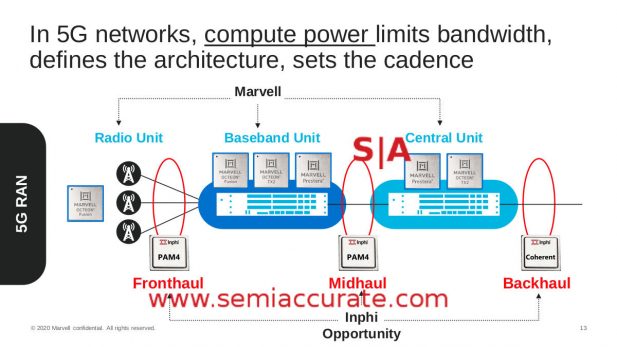 The missing pieces all say Inphi

Marvell, through the assets it got when it purchased Cavium, is a big player in the 5G infrastructure space. The chips may carry a name that rhymes with Tamsung but that is the idea with semi-custom, no public glory but lots of solid revenue. Marvell is positioned to supply almost all the pieces of the 5G infrastructure silicon market now but have little to nothing on the interconnect side of the game.

Image for a second if they could supply that piece, they could design a semi-custom basestation from end to end for a customer. It also gives them a very strong lever to win every piece of the system. Better yet there is a lot of synergies that will result in lower qual times and cost, no cross-vendor finger pointing when things go wrong, and so on. The down side is that if you have a single supplier and things go wrong, they tend to go very wrong so all is not completely rosy. That said it is a very compelling play.

In the end that’s why Marvell bought Inphi. It wasn’t to make the things that Inphi makes and sell them with a Marvell sticker in place of an Inphi sticker, it is simply to be where the market is going. Once 100GbE is ubiquitous, optical will be too and Marvell now has the best IP out there to play in this space. They are also the only company that SemiAccurate knows of that can integrate this level op optical IP into a customer specified chip. When you look at the big picture and where the market is going in the mid-term future, buying Inphi makes a lot of sense.S|A