Qualcomm is introducing Quick Charge 5 today and it is a very impressive step up. SemiAccurate was a bit underwhelmed with the last step(s) of QC4/4.1 but 5 brings us back to the big bang advances of yore.

Most people don’t realize it but the majority of the tech that allows you to charge a phone with a battery large enough to last more than an hour in a reasonable period of time comes from Qualcomm. Years ago the company realized that the charging capability of USB would be inadequate to meet a phone’s operating needs in a few generations.

This doesn’t mean it would take a longer time to charge, it means that a phone could draw more power under real-world use cases than USB can supply. If this was allowed to happen, your phone could end up draining the battery when plugged in and charging as fast as possible. Obviously this was not something that could be allowed to happen so Qualcomm came up with Quick Charge. 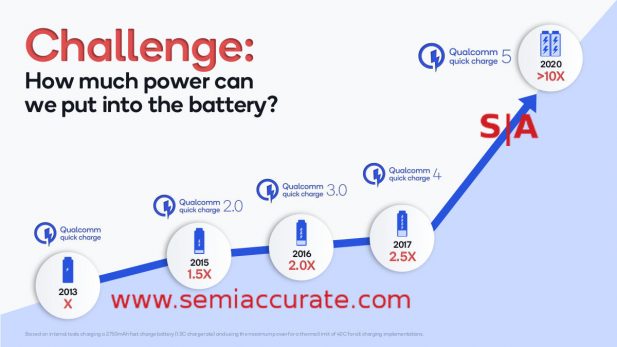 Over the years there were many advances in the specs, multiple charge controllers to spread heat, higher voltages for greater efficiency, and all sorts of protection features to keep things safe at higher current levels. Probably the most important advance is rarely discussed, it is easy to dump large currents into a battery, any idiot can do that, but it degrades the cell at a scary pace.

In SemiAccurate’s opinion, the biggest advance Qualcomm made with Quick Charge is dumping large amounts of current in to a battery while making sure that it kept under the thresholds where cycle life degrades rapidly. This is the technical way of saying you can use Quick Charge X without fear of your battery cooking in a few weeks, something few other can claim. This is probably the hardest part of quick charging, reliability, don’t overlook it.

Quick Charge 1-3 were big steps forward in charge rate but QC4.x didn’t move the needle as much. It was mainly a spec that integrated USB-PD capbilities in to the QC universe for obvious reasons. QC4 was USB-PD compatibility and QC4.1 was a superset of QC4 and QC1-3, 4.0 on it’s own was not as backwards compatible. One very important thing to keep in mind is that USB-PD only covers the transport of the energy, basically what goes over the cable. It does not determine how much energy a battery can take, nor how much an adapter should supply, just what the various pieces can deliver.

This distinction is far from semantic, it is fundamental to the concept of charging. QC pre-4 governed what an adapter would supply, what a cable could take, and what a battery can safely ingest. USB-PD only covers the middle bits which in our opinion are the least important piece of the puzzle. With USB-PD capable of delivering 100W of power, 5A at 20V to be specific, what is there left to do with QC5? As it turns out, quite a lot.

Qualcomm’s headline claims for QC5 are 100+W charging, 50% charge in 5 minutes, and 100% charge in 15 minutes. These are impressive numbers but they don’t mean very much if your battery drops below 80% capacity after 10 charges or if your phone catches fire every so often. Even having a spot on your phone that is hot enough to blister skin is generally considered sub-optimal, and 100W going into a <10mm thick device for 15 minutes is more than enough energy to do that. So what does Qualcomm do?

QC5 supports two charge controllers on a device, similar to older QC variants. This allows QC to split the amperage up in to two paths, three if you count the small chunk that goes to the PMIC to keep the system awake but that is negligible in size. This allows them to keep things cool and spread the heat out to two different places on the device. The higher the heat, the lower the efficiency and the faster the battery degrades, at least above an optimal point.

Another advance is stacked cells, something Qualcomm does not make or specify but has to support. Stacked cells are about what they sound like, instead of one 4000mAh cells you have two 2000mAh cells wired together in a pack. This allows the battery to take 2x the current with the same negative effects as a 4000mAh cell with 1x the current. QC5 supports 1-2 cell batteries.

One down side to stacked cells is you end up with 2x the voltage so you lose a little efficiency stepping it down to the ~1v needed for the SoC to run on. The flip side of this is that you don’t have to change the voltage as much for some other things like the screen backlight and a few other bits. Additionally the movement of said current around the device is more efficient up until it is stepped up or down, higher voltages mean less transmission loss. All in all these higher voltages are said to balance out or are a slight win but not enough to worry about.

Charge rate (C-rate) is the next factor, it basically determines how fast a battery can charge or discharge. If a battery is 1000mAh, it can supply 1A for 1h, 2A for .5h, .5A for 2h and so on up to the limits of the cells. Charging is the same way, slow chargers are in the .1C range, fast chargers can be 1C or more. If your chemistry allows 1C, a 2 cell stacked cell battery can effectively charge at 2C even though the cells are 1C capable. You can also design the cells to be more capable, the high C-rate cells now are in the 3-6C range but you trade off some other things like capacity to get there. In any case a properly designed high C-rate battery is pretty flat in it’s degradation, going from 3C to 6C only degrades ~1% faster or so.

QC5 can take advantage of this. If you have a high C-rate cell in two stacked cell guise, it should be able to take a huge amount of current safely, with safe being defined as the for cell itself as well as for the user holding it. But again this takes a lot of work.

One thing Qualcomm does with the new version of Quick Charge is to continually monitor the whole charging system from the adapter/input to the phone. USB-PD has an identifier chip in it that signals the capability to both ends and the cable so it should never be given more current than it can handle safely. We live in the real world and because there is money to be made in skipping features, we have counterfeit cables. They are a problem when you are transferring data but not much of an issue at early USB power deliver rates. At 100W however you can do serious damage with a cable that misreports it’s capabilities, intentionally or not.

This is why QC5 continually monitors the charge ecosystem for power, heat, and a bunch more safety critical variables. Thermal trips are now required, timers are included, and the adapters now have to report data back to the system for monitoring. While no system is perfect, Qualcomm went a long way towards that goal in this round, you have to when the minimum spec for QC5 is 45W.

Another interesting bit is that USB-PD, the base spec for energy transport across the cables, has 3.3A and 5A listed, QC ads “>5A” although it still operates at 3.3-20V in 20mV steps. How do they exceed the USB-PD spec? They don’t, if you want to go >5A you need special hardware, in this case a captive cable. That means a charger that you can’t take the cable off of so you can guarantee the quality of the physical transport. If an OEM wants to go >5A, they can but they need to control all parts of the current path. At no times will Qualcomm’s QC5 exceed the USB-PD ratings of the devices though, they will only scale things down if an anomaly is noticed.

Qualcomm has two chips for Quick Charge 5, and as per their usual nomenclature, it should be obvious from the names what the SMB1396 and SMB1398 PMICs do. Just in case you don’t get the obvious, we will point out that the 1396 is a divide by 2 charge pump, the 1398 is a 3-phase buck. Like we said, obvious from the names, right? The 1398 also comes in cherry and chocolate flavors, the 1396 is only cherry this time around. Cue the letter from confused Qualcomm engineers in 3…2…1….

These new QC5 controllers should be on the market later this year and they support current high end Qualcomm SoCs, namely the Snapdragon 865. QC5 silicon is actually compatible with lower end devices and laptops, not just those from Qualcomm, but it is unlikely you will see them in anything but high end mobile devices in the near future. Why? Cost but more importantly there isn’t as much need in lower end devices, they rarely if ever spend the BoM on the battery tech needed to make QC5 useful, remember how long it took for USB-C to become ubiquitous in mobile? Batteries and 45W Gallium Arsenide chargers cost a lot more than a USB-C port and a mux but rest assured, QC5 will trickle down the stack just like the 4.1 versions before it.

So that in a nutshell is what Qualcomm’s new Quick Charge 5 brings to the table. The headline 50% charge in 5 minutes, 100% charge in 15 minutes is really impressive but the added safety and battery life features are the real stars of the show. Throw in stacked cell battery support and higher efficiency and you have a winner. Other than the limited flavors on some models, what’s not to love?S|A