It isn’t announced but it is public

About a month ago, SemiAccurate brought you exclusive news about a substantial Intel reorg. Curiously however, that change has still not been publicly acknowledged even though it has clearly happened.

If you recall, SemiAccurate had two stories about Intel a little over a month ago. The first one was about impending layoffs at the company, that a reorg was happening, and some executives leaving. You might note that Intel has denied the layoffs as long as you don’t pay attention to the tense of their statement. The second piece had a bit more detail about the reorg itself and one high profile executive who is retiring. So two of the three news items happened, the third was set for the future and SemiAccurate is confident it will take place. Then we saw this. 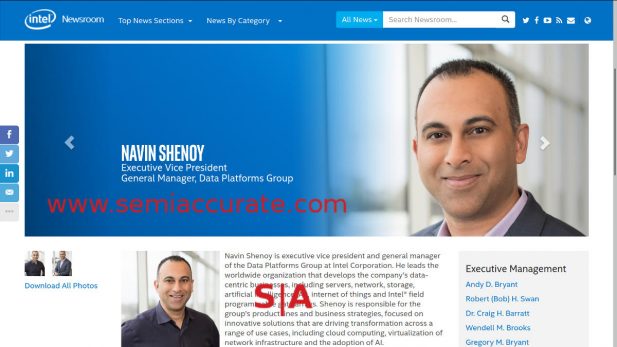 Navin Shenoy, Executive VP of… what?

Navin Shenoy is now Executive Vice President and General Manager of Intel’s Data Platforms Group so congratulations to Navin. More interestingly is there hasn’t been an official acknowledgment of such a group existing, it was the Data Center Group (DCG) until recently. The only public announcement of this change was the SemiAccurate article listed above, the change on Navin’s executive bio page, and a few other things in press releases and such.

While we are not intoning any conspiracies or underhanded dealings, it just seems odd that such a change wouldn’t be made public for so long. If you are going to announce a person at an event, having the audience being able to find out what that job actually is or does seems like a logical thing. We can only speculate that the changes were done before year end for accounting reasons so they may be made public at the Q4 analyst call. If it helps, we here at SemiAccurate do feel some sympathy for Navin having to explain this change 73 million times at CES, it probably gets old after 4.S|A