Today Intel is claiming the world’s largest FPGA, the Stratix 10 GX 10M, is in early sampling. Like the Xilinx VU19P that previously held the record, the GX is made with multiple dies.

SemiAccurate has been following the march of chip construction for several years and and the Stratix 10 GX 10M is one of the more advanced of the breed, with a caveat to be explained later. Take two Stratix 10 GX sans 10M dies with an individual capacity of 5.1M logic elements and stitch them together via three (in the diagrams anyway) EMIB bridges. The result is a 10.2M element FPGA that has a 10M suffix, something Intel says is a world record. 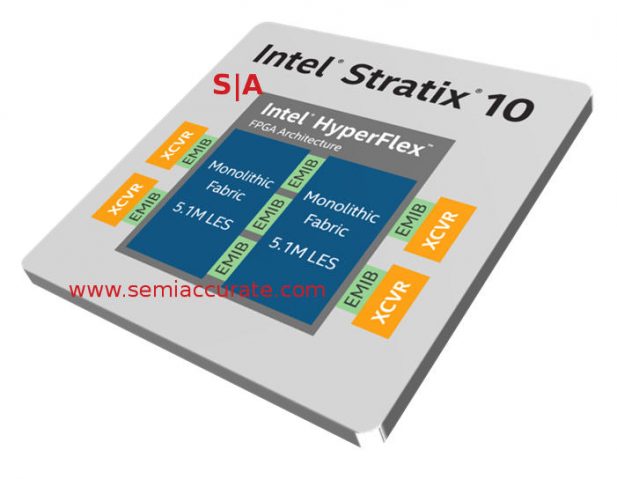 Take a look at the diagram above, each GX die has five EMIB bridges, three to connect to the other FPGA die and two to add a memory, SerDes, or PCIe tile. One interesting bit to note is that Intel is very proud of the fact that they claim to be the only PCIe4 approved device and are really shouting the fact from the rooftops.

PCIe4 is obviously a serious competitive advantage is high performance computing and the FPGA world and Intel is proud of their achievement. This brings up the obvious question of whether they are pointing out that AMD’s Rome is the better choice of CPU, or simply taking a dig at the other side of the company that may have a partial line of PCIe4 bearing CPUs out at the end of next year. But not for “high performance” SKUs which the world’s largest FPGA should be paired with, right? 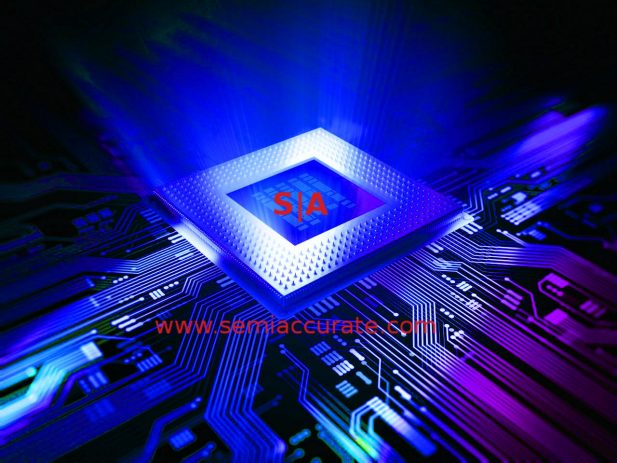 As real as it gets?

OK, enough trolling, time to move on to the caveat. Intel is saying that, “Multiple customers have already received operational samples of the new Intel® Stratix® 10 GX 10M FPGA”, something confirmed by Intel PR for this article. There are no pictures of the device nor could any be provided for this article, only the two diagrams above.

After the multi-year long 5G modem debacle where Intel strongly hinted similar things but only ‘showed’ faked chips, we are skeptical until we see one or someone we trust has one. SemiAccurate did call a few likely candidates for early Stratix 10 GX 10M sampling but none were aware of the product. Don’t take this as conclusive, it just makes us twitchy. Lets hope our nervousness is unfounded this time.

Then there is one more technical tidbit that the 10M shows us, a new construction capability that Intel has not shown before. To us this is the most impressive part about the new 10M.

Note: The following is for professional and student level subscribers.

Disclosures: Charlie Demerjian and Stone Arch Networking Services, Inc. have no consulting relationships, investment relationships, or hold any investment positions with any of the companies mentioned in this report.