Well, you can’t buy them yet but there are SKUs now

Today Intel is finally launching, again, their Ice Lake mobile CPUs. What SemiAccurate found interesting this time is not what was said but what was not said.

Lets start out with the easy stuff, we told you about the architecture months ago along with some of the SKUs that Intel flatly refused to release. These replace the faster 8th/9th generation Whiskey/Amber Lake CPUs, or more precisely supplement them because despite the rhetoric, Intel still can’t make 10nm CPUs in volume. The architecture of the Ice Lake CPUs, code named Sunny Cove, is pretty good. The clocks and availability say in no uncertain terms it can’t be manufactured in volume much less at a profit. 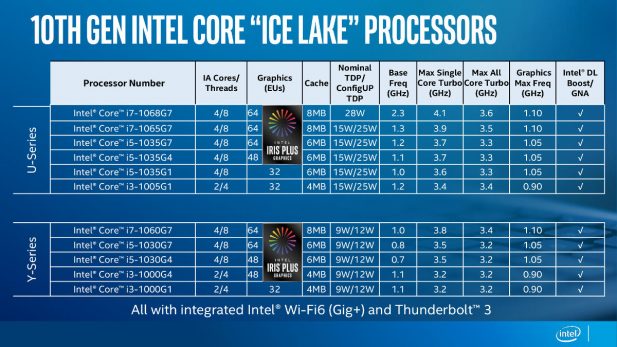 Not fast but they exist now

Getting back to the chips being launched today we have 11 SKUs, six U-Series at 15/28W and five Y-Series at 9W. Clocks range from 700MHz-2.3GHz base, 3.2-4.1GHz peak turbo and GPU frequencies in the .9-1.10GHz arena. Core counts are either two or four with HT turned on for all cores, credit to AMD for forcing Intel to stop abusing consumers with fuses on this front. The fact that HT is on by default also says that this crop of CPUs will have all of the Spectre/Meltdown and subsequent patches either in hardware/firmware or applied by default from the OEM. This is a good thing.

What do these Ice Lake CPUs bring to the table? Wi-Fi 6 for one but that has a down side. Intel built everything but the analog RF parts of the Wi-Fi block into the CPU itself meaning you only need a small external chip to enable Wi-Fi 6. This is a good thing. The link between the two is CNVi which is proprietary and Intel will not license to anyone else. This is bad because it means if you want decent Wi-Fi with more than 2×2 antennas like any sane person would prefer, you have to go with a much higher BoM cost device, use more board space, and generally have more headaches.

More problematic is that the restrictions for “Project Athena”, the new Ultrabook program, effectively mandates the Intel Wi-Fi solution. At the moment this is not an absolute mandate, nor is there a massive slush fund to force OEMs to do things they don’t want, but stay tuned here. Intel doesn’t do things like this to make a better laptop, they do it to exclude competition. Unfortunately once again the consumer looks likely to get an inferior device as a result.

On the plus side we have graphics, specifically the new Gen 11 GPUs with up to 64 EUs. This new architecture is a big step forward and has quite a few features not yet seen elsewhere, variable rate shading being the big one. Clocks haven’t really progressed much on this front, something we have previously ascribed to process tech. That said the Gen 11 parts appear to be faster on a per-clock basis, and should pummel their Whiskey/Amber Lake predecessors because they have 2.5x the EU count.

Now lets get to the interesting parts, performance. We would like to thank the briefing gods at Intel for their mercy in not forcing a few dozen awful slides about a risible scenario that some subculture that no one has heard of before uses Ice Lake to make their life 713% better. Similarly there was a lack of bar graphs, thank you again, which showed how some cherry-picked software was much faster now while hoping you would infer that it meant all software was similarly juiced. Instead you got one slide that has some infographic level claims. 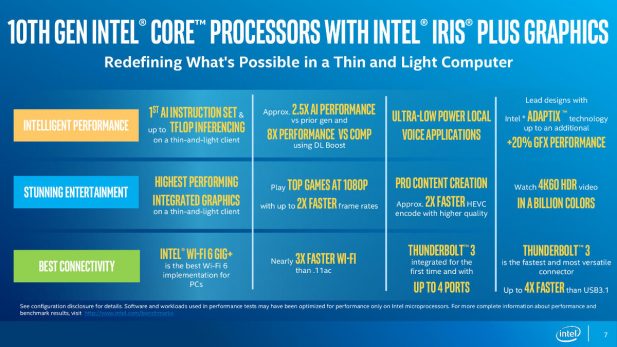 When you read the fine print, the one line that has actual performance claims, doesn’t really compare what you think it does. The gaming claims are against an AMD 3700U at the 25W level for each in pretty casual games. This wouldn’t be an issue but Intel specifically does not list the CPU that was used to test and whether or not it is a production model or ever will be one. It is also a 15W device juiced to 25W, nothing wrong there, but what is both wrong and unethical is that Intel didn’t list clocks for either one.

This is a 2U system, Unacceptable and Unethical

Is it a hypercooled one in a million golden sample that took a team of interns weeks to find just so they can claim a meager lead in a few casual games? This sleazy tactic completely invalidates any claims Intel has to performance leadership in our eyes and is truly beneath the company. Whomever thought this debacle up should be fired. Worse yet when a company claims a lead in trivial games it usually implies they lose in real games with complex graphics and features. Why does Intel keep inflicting wounds on themselves like this?

More problematic is how the CPU performance was messaged. Lets start by asking why Intel didn’t include any references about how Ice beat their own previous 9th Gen/Whiskey Lake/Amber Lake CPUs on anything but scenarios where the new ISAs like VNNI shine. Answering our own question it is because Ice Lake as a product, not an architecture, is simply not noticeably faster than it’s predecessor. Then again we told you about this almost two years ago.

While we shouldn’t complain too loudly lest the briefing gods hear and blight us with echoes of Intel briefings past, it is pretty clear that Intel knows how good Ice Lake isn’t. More importantly there is the unusual timing of the CPU NDAs going up shortly before OEMs are launching their designs. We may be reading too much into this but from our vantage point it appears to be a ham-handed way of making sure the message about Ice Lake goodness comes out and the buzz gets going before actual third party data can be released. The next few weeks will tell if we are right on this or not.

Last up we have an interesting data point. Go back to the SKU chart and look at the one outlier, the elegantly named Intel Core i7-1068G7 which runs at 28W. Look at the clocks and power use. While there are no comparable 28W parts on the previous generation, there are right below it. At the 15W level the i7-8565U runs at 1.8/4.6GHz base/turbo clocks, nearly 40%/18% faster respectively. With Intel’s claim of an 18% IPC improvement, the best case is parity for Ice Lake, a pretty devastating data point for 10nm. Independent benchmarks will probably not be Intel’s friend.

So in the end what do we have? Ice Lake is a turkey not because of architecture but because of manufacturing. Intel can’t make 10nm products in volume, has delayed several recently, and the future of financial viability is not looking positive for these chips. Ice Lake could potentially be good at some things but the unethical way Intel messaged the line makes that seem very unlikely. Power isn’t better either or Intel would have flooded reviewers with samples. There really is no up side on this launch, you are probably going to be better off with a 14nm Intel laptop which will be marketed as 10th gen as well or if you can wait a little while, hold off for the 7nm AMD Ryzen mobiles.S|A

Author’s Note: Due to travel we had to miss the briefing on Ice Lake and could only ask questions late in the game. Intel didn’t have enough time to answer a few of our questions but when they do we will update this article when and where appropriate.