Taking on Duals with Quads… 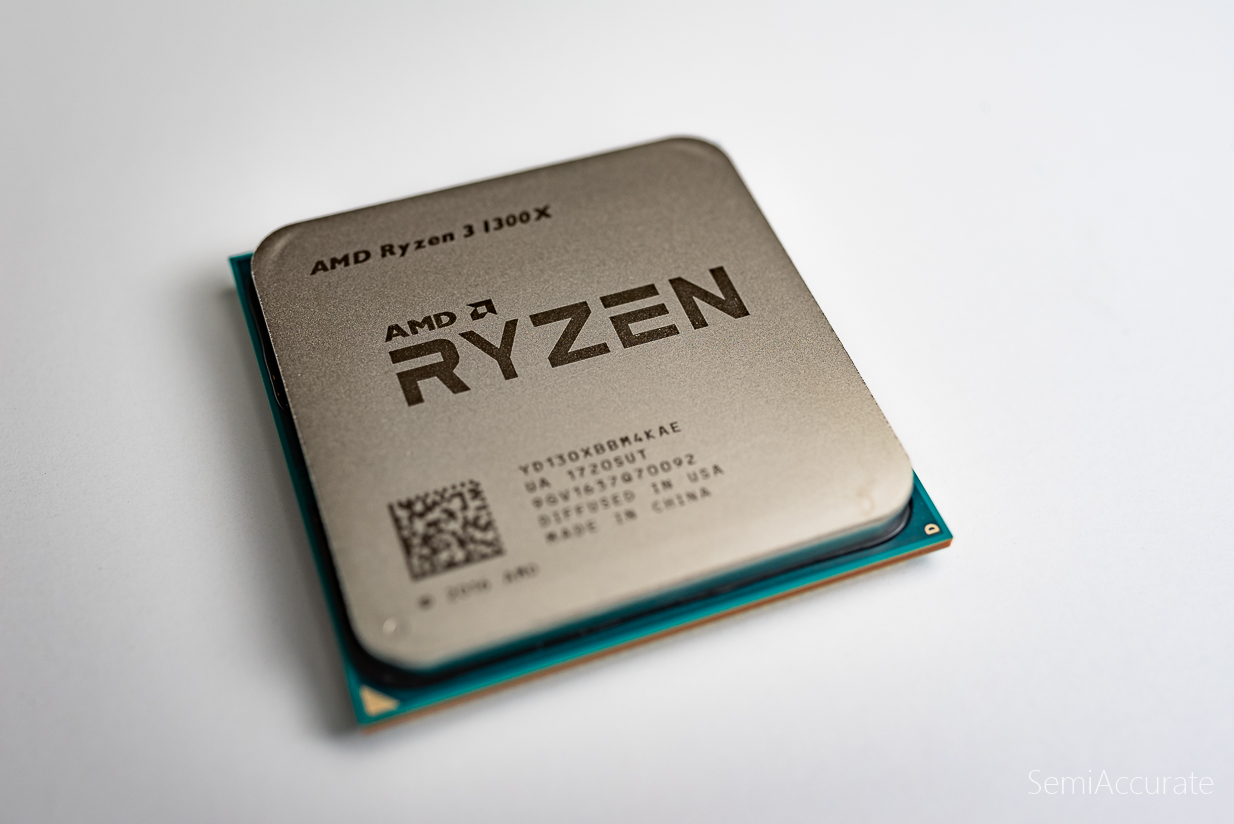 In this article we’ll be taking a look at AMD’s Ryzen 3 1300X CPU. Based on AMD’s now well-know Zen core the 1300X uses a 2 + 2 configuration where half the cores in each CCX are disabled. This allows AMD to offer the full 8 MBs of L3 cache present on the Summit Ridge die. AMD has positioned the 1300X up against Intel’s i3-7300. This is a dual core Kaby Lake chip that uses Hyperthreading to try to compete in multithreaded workloads. None of AMD’s Ryzen 3 chips offer more than one thread per core, but they are all four core chips. This gap in core count puts Intel’s offerings at a bit of a disadvantage in this segment. Intel does have one important tool in the form of a 4 Ghz base clock that it can use to overcome this gap. You can find it on Amazon for $130 bundled with AMD’s Stealth cooler.

Just like the rest of AMD’s desktop Ryzen chips it supports 2 DDR4 memory channels at speeds of up to 2666Mhz with two single rank DIMMs or 2400 Mhz with 2 dual rank DIMMs. If you want to use four DIMMs you’ll be limited to 2133 with single rank memory or 1866 with dual rank memory. In practice and with the latest AGESA 1.0.0.6 update this chip will work perfectly fine with whatever the XMP profile is for your memory kit. We’ve had no trouble setting different memory kits with their XMP defaults at 3200Mhz or 3000Mhz.

AMD’s Ryzen 3 1300X offers 24 on-die PCI-E Gen3 lanes and slightly different I/O options depending on what motherboard chipset you opt for. 16 of these lanes are reserved for graphics and if you go with the X370 chipset these can be broken down into an 8 + 8 lane configuration for crossfire or SLI setups. Otherwise it’s a single 16 lane link.

In addition 4 lanes are reserved for communicating with the chipset and the final four are reserved for storage and NVMe devices. With the X370 chipset the four lanes dedicated to the chipset can be broken down into 8 Gen2 lanes. With the B350 chipset that becomes 6 Gen2 lanes and with the A320 that again becomes 4 Gen2 lanes. If you care about having a lot of PCI-E lanes the desktop Ryzen 7, 5, and 3 parts are probably not for you.

All desktop Ryzen parts offer the same I/O which is dependent on the chipset you chose. With the X370 chipset that means 12 USB 3.1 ports and 6 USB 2 ports. This is bundled with 4 SATA ports and a single NVMe x4 device. If you use a NVMe x2 device this becomes 6 SATA ports. 2 SATA Express devices, for those who still care about this standard, are also supported. Like pretty much all modern chipsets RAID 0, 1, and 10 are supported. Overclocking is supported on the X370 and B350 chipsets but not the A320 chipset.

None of products in the Ryzen 7, 5, or 3 families support multisocket configurations. At the moment if you want multisocket system you’ll have to turn to AMD’s EYPC. 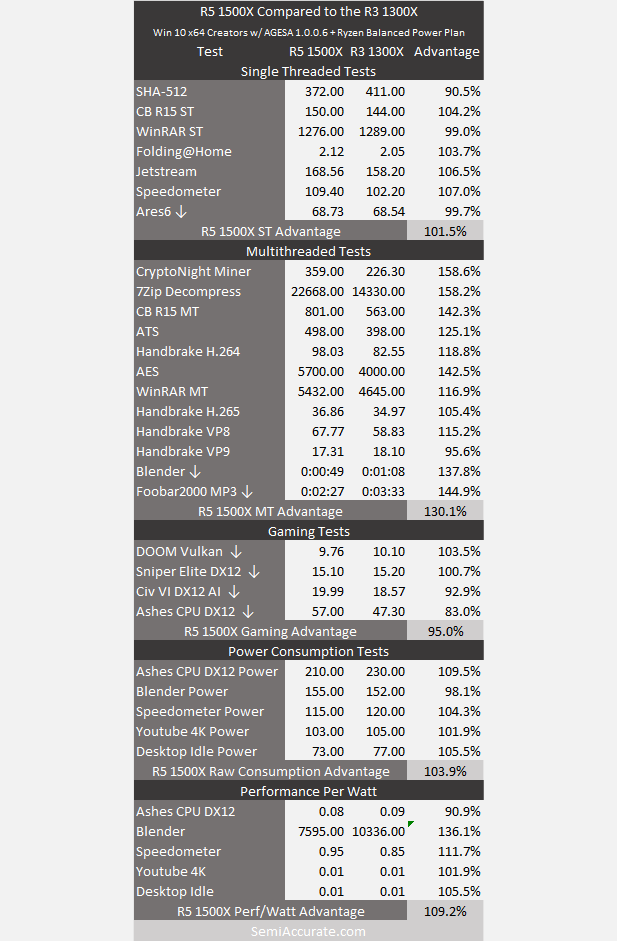 The gap is most pronounced in multi-threaded workloads where the 1500X is able to bring its extra threads to bear. In terms of single threaded performance, gaming performance, and performance per watt the 1500X and 1300X are essentially the same. 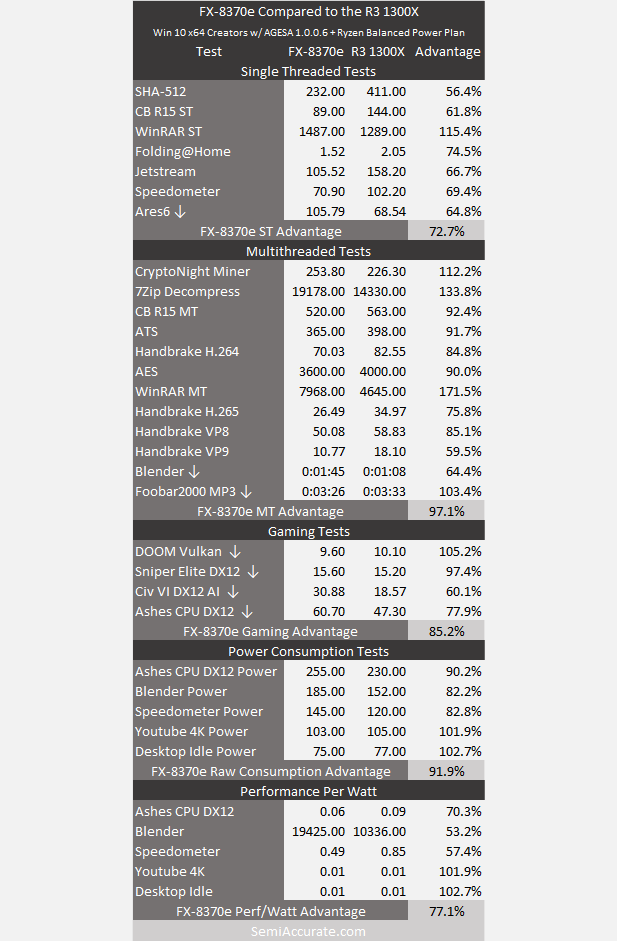 Comparing the 1300X to the old FX-8370e we can clearly see the significant advancements that the new Zen core has brought to the table. 1300X offers a clear lead in terms of single threaded performance, gaming performance, and performance per watt. In a somewhat interesting turn of events multi-threaded performance and raw power consumption are pretty similar between these two chips. 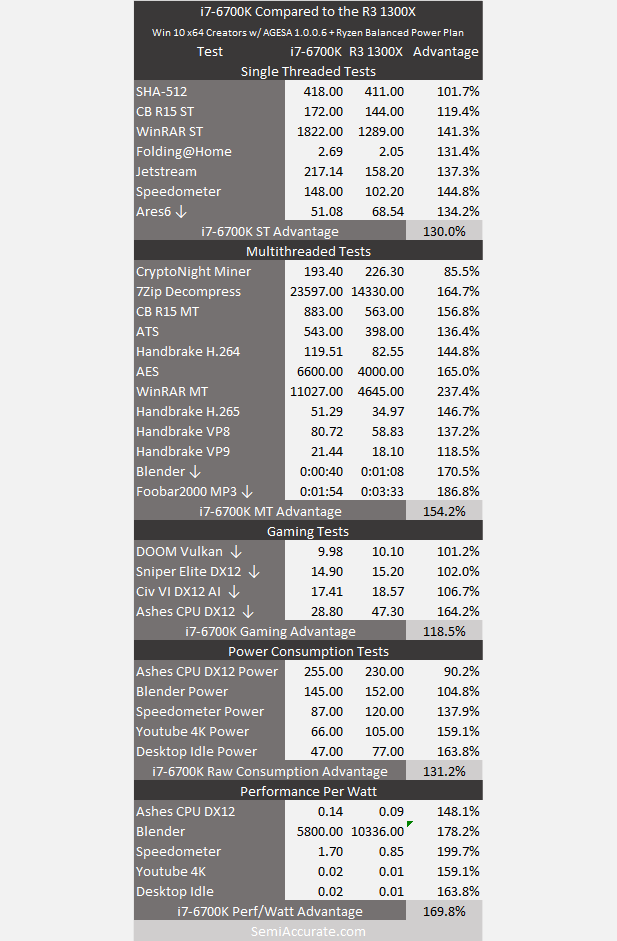 Going up against Intel’s i7-6700K we can see that the 1300X gets blown out in just about every metric of performance. That’s a perfectly fine result given the difference in price between these two chips. The important points here are the single threaded performance comparison where Intel holds a clear lead the performance per watt comparison where Intel holds a commanding lead. If we were to compare the 1300X to its Kaby Lake competition we would see similar results in these two areas while the 1300X would take the lead in multithreaded performance and the gap in gaming performance would close. 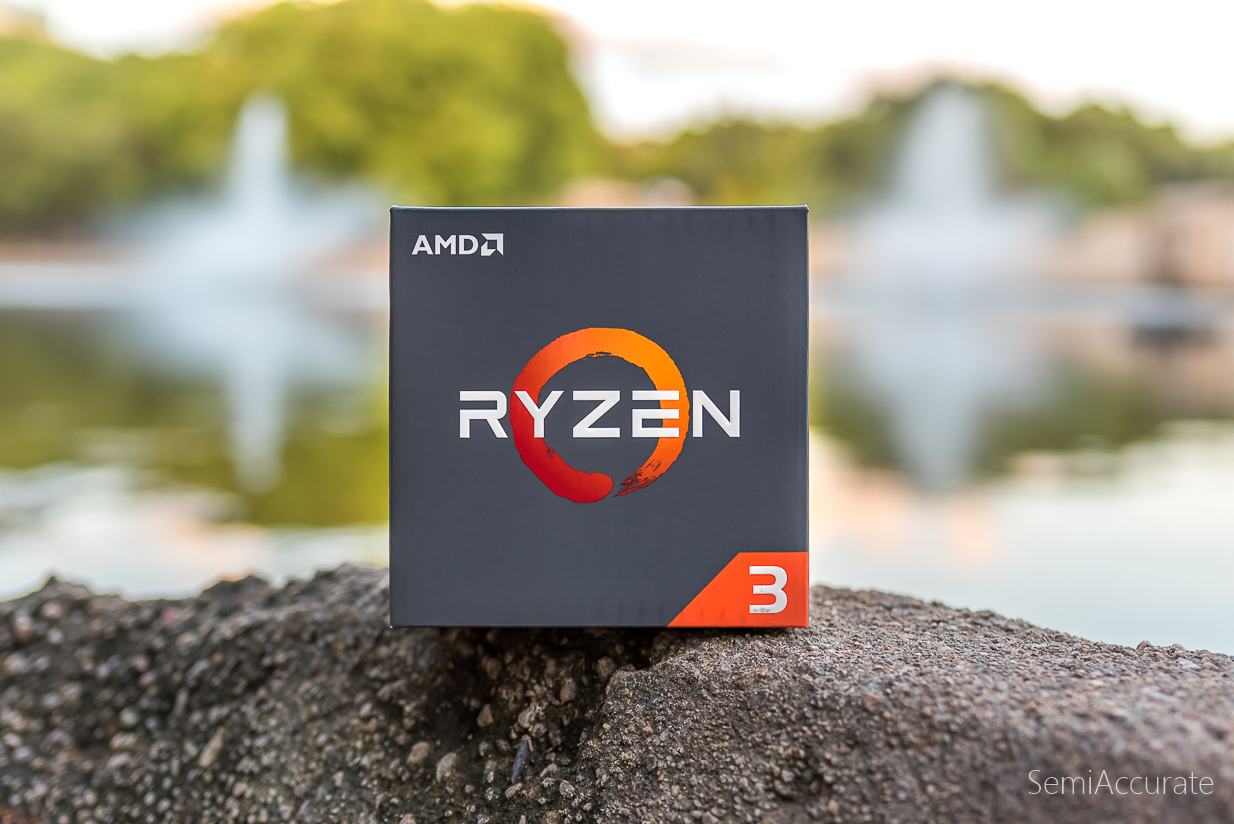