Rant-ish: How to milk stupid consumers and piss off enthusiasts

Intel’s abject stupidity in messaging continues today with the ‘launch’ of Skylake, or not. Just when you thought they couldn’t lower the bar, they pull out all the stops and surprise even the jaded.

Why are we so negative about this new processor that brings so much to the table that Intel won’t actually talk about its theoretical features? Because, well, they are ‘launching’ a family of products that they want the press to drool over and convince you to buy without actually telling us, and you, what the hell it is. Like the BS i3/i5/i7 marketing scam, they are telling us how wonderful it is, then absolutely refusing to answer basic technical questions on it.

The ‘presentation’ on Skylake was anemic to the point of being almost painful, 25 slides of which two were worth the elections wasted to view them. Most of the rest we had to explicitly ask about to get what we consider bare minimum specs. So let’s go through the few scant bits Intel deems fit to tell you about, but you should buy it anyway because it is more profitable for them than Broadwell. Don’t believe the hype.

The 6600 has 2MB of cache fused off for no real reason other than profit, the 6700 has the full 8MB usable. That said we assume they are the same die, we asked and Intel would not actually comment on whether they were or not. This is just stupid, they are on sale as you read this, if we cared enough we could buy a few, pop the lids off, and look. We don’t care that much, Sky brings squat all to the table so why bother.

Both variants only have 16 PCIe3 lanes on die, a big step backwards from everything prior to Broadwell. There are more available via the chipset, but they are painfully broken for reasons we will come to later. The bandwidth is effectively crippled if you want to use anything other than a graphics card with non-painful latencies.

Memory is two channels of DDR3L-1600 or DDR4-2133, two DIMMs per channel. TDP is 91W, a number that is meaningless without full specs of the CPU. If it is a GT4, that is solid, if it is a GT1 it is a joke. That would not be as sad a joke as the ‘specs’ we were given but still pretty pathetic. We have no idea if the controller is the same as in Broadwell or all new, such things are far too technical for today’s launch.

Both chips use a socket called 1151 that we again have no clue what it brings to the table over the previous parts, other than the usual price hike. There is one chipset called the Z170 but it will be re-fused into countless different guises before long. We can say it is on a 22nm process but we can’t say anything about the die size, that would make baby kittens cry or something so it was deemed to top-secret for today. 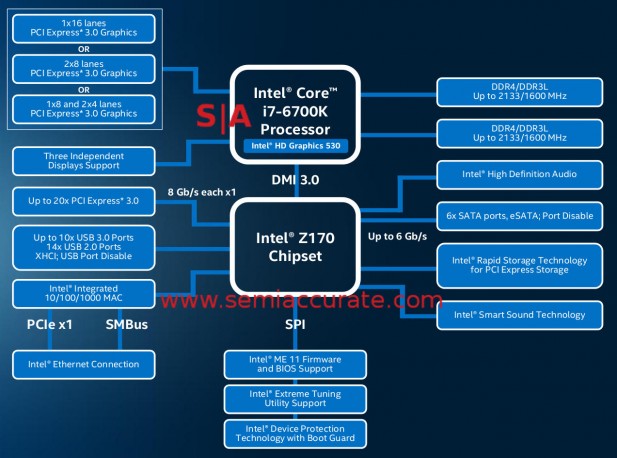 About as technical as Intel is willing to get for Sky

The Z170 has a few nice features, 10 USB3 ports, 14 USB2, GbE, 6 SATA presumably -6Gb, and support for NVMe. The real interesting part is that there are 20 PCIe3 lanes off the chipset, a good thing right? Umm no, it is monumentally stupid. Why? Because the link above connecting the CPU and the Z170 is DMI 3.0 which is 4 lanes of roughly PCIe3 bandwidth wide, ~32Gbps.

That means you can hook up 20 8Gbps PCIe3 lanes, 160Gbps for the math averse, plus 36Gbps worth of SATA and 50Gbps of USB3 to it, and it all talks over the DMI 3.0 link. 230Gbps doesn’t fit well into 32Gbps last time I checked, not that we ever expect anyone to come close to this setup. That said we do expect a buyer of a high-end gaming desktop to have a NVMe drive or two and, well you are already over the DMI bandwidth limit there. Plug in a USB3 peripheral and you are choking.

If you have a GPU in the 16x slot off the CPU, then you are pretty much locked out of any type of storage speed. Those meager four lanes omitted from the CPU for no sane reason were a lot more useful than you might expect. If anyone at Intel is wondering why we keep laughing every time we hear about how you really want to revive the desktop, stop and think about the stupid decisions you are making. Cutting PCIe lanes off the CPU and chaining way way way too many ports for the meager bandwidth the chipset has is not a way to win back the enthusiasts you screwed previously. Then again charging them a 10+% premium to buy back the overclocking features to removed a few generations ago isn’t much on the placation side either. This architecture is just stupid and wrong.

Speaking of overclocking Sky has 1Mhz increment overclocking granularity, a good thing if the platform wasn’t so broken. Intel also lists a memory overclocking ‘feature’ that says Sky supports DDR4 while Haswell only supports DDR3 but we are at a loss to tie this into overclocking like they want. Just buy a few and don’t worry about the features, they are being hidden for a reason that involves stockholder dividends. Memory is also OCable in 100/133MHz increments, double the granularity of Haswell.

On the graphics side the 6700 runs the GPU at 1150MHz peak turbo. How many shaders? Damn good question that Intel flat-out refused to answer, but there is no external memory/Crystalwell on it. Is it a GT1, GT2, GT3, or GT4? That is top-secret even though the damn thing is on sale now, can you think of a good reason Intel won’t tell you what they are selling you? Come on now, this is pathetic. One thing we can say is that it is Gen9 graphics, ‘all new’ but no actual features added and talk of capabilities is strictly forbidden for no real reason.

There are three video outs at up to 4096×2304@60MHz and HDMI@24Hz is supported. If Anand had lived to see this release, I am sure he would be smiling as usual. On the video decode side, well Sky might have video decode functions, or it may not but we can’t say anything about them. They might be better than in Broadwell or they might have been removed entirely only to be sold back to you for an absurd premium on a handful of SKUs with otherwise useful features removed. Damned if we know, this stupid launch keeps such secret bits from us. Did we mention you can buy them now but Intel won’t actually tell you what you are buying?

How will it perform? Good question, but if you look at the clocks they are down on their Haswell equivalents. That means the most important metric, single threaded performance, is very likely lower or at best on part with Haswell. Good upgrade there, eh? Now do you see why Intel is hiding all the ‘features’, if you knew what they were there would be no reason to buy. If you are not convinced, go listen to Intel’s Q2/2105 earnings report and listen to what is said about the cost of Skylake vs Broadwell/Haswell. Intel really wants you to buy this part but not because it benefits you.

Another part of this mass stupidity is because Intel is going to announce the architecture and SKUs at IDF, likely in the middle of the show so the press has no time to write it up, review it, or ask questions. If this isn’t a warning flag for a tepid at best architecture, I don’t know what is. In any case if you are into surprises, buy one now and hope there are features that make it worth the premium. Good luck with that. Until then no die size, and not so much as a die shot of the product that is on sale now, brilliant!

So in the end, what do we get? Frustration, questions, no answers, and idiocy for the sake of idiocy. There is no excuse for this type of ‘launch’ other than to grab headlines for the sake of media metrics and supposed ad ROI at the cost of turning off the few enthusiasts who actually care. Consider that a job done. By the time the data actually comes out in a few weeks, no one will care which says there is really not much to care about. I wonder how many sites are going to praise this one without having anything to actually praise? Intel tried really hard to keep the author in the dark about this launch for a reason.S|A