Hynix gets into retail memory with Klevv

Computex 2015: A new brand from an older company

It looks like SK Hynix is stepping into the retail memory game with their new Klevv brand. Actually things are a little more complex than that on the business front so SemiAccurate will explain that side too.

You may be aware that Hynix makes memory and is part of the larger SK group, hence the name SK Hynix. They also tend to be on the forefront of new memory types like GDDR5 when it first came out and now HBM. While fabbing memory is a big operation, it is only a part of what SK does, and Klevv is another part although it is much smaller at the current time.

While Klevv uses the memory from SK Hynix, it isn’t part of the same group, it is a separate organization under the SK umbrella so they theoretically are free to use whatever they want. That said it would be rather silly to give up a related source of high volume, high quality, and bleeding edge memory types. Think of the relationship between SK Hynix and Klevv as cousins or siblings, not parental.

While we don’t know for sure how much Klevv can lean on the SK Hynix group, we would be surprised if the bonds weren’t really close. That means Klevv is not just a repackaging house like many memory brands, they have access to the engineers and fabs in ways few other retail brands do. It is a bit early to say this will lead to good things but the pieces to make products others can’t are definitely in place.

So what does Klevv make? At the moment it is just DDR3 and DDR4 modules with a bunch of other devices coming in a few months. The offerings are all at the higher end of the spectrum and seem to be very high quality. We will now append this statement to say that physical form factors and heat spreaders are about as unrelated to DRAM performance and quality as you can get. It is going to be interesting to see how they perform on the test bench though, Klevv should have access to the right bits.

The first thing we will say about the Klevv modules is that they are impressively built. Those solid-looking chunky metal heat spreaders are actually solid chunky metal heat spreaders. Each one is heavy and built from multi-part heavy slabs that are either machined or well cast. The edges on the Cras line for example are especially sharp, something that intones actual machining. 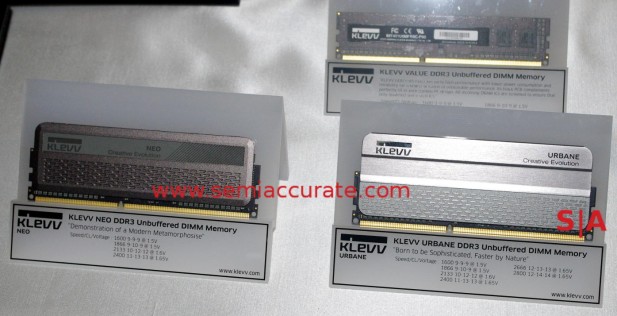 Three of the five DRAM brands

Three lines pictured above are all DDR3, with the value line being simple DDR3 modules. This line runs up to 1866MHz and is, well, generic. The other two are much more interesting, called Neo and Urbane, low and high speeds respectively. Neo runs at a max of DDR3/2400 while Urbane hits DDR3/2800, both at a max of 32GB in 3x8GB kits. Both have serious metal heat spreaders and are, well chunky and heavy. 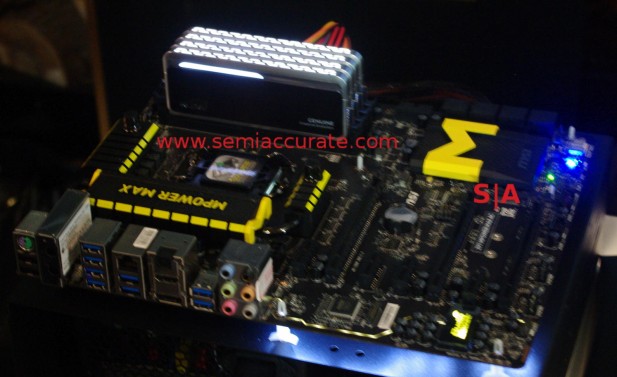 The last DDR3 line is called Genuine and on the spec sheet it is effectively a copy of Urbane. The heat spreader both looks different, more rounded and flat vs the oval textures of the other two, and hides a dark secret. Actually that secret is nowhere near dark, it is quite bright, Genuine has LEDs on board, something that appeals to some and not to others. If you don’t like LEDs, just buy Urbane and save a few dollars. 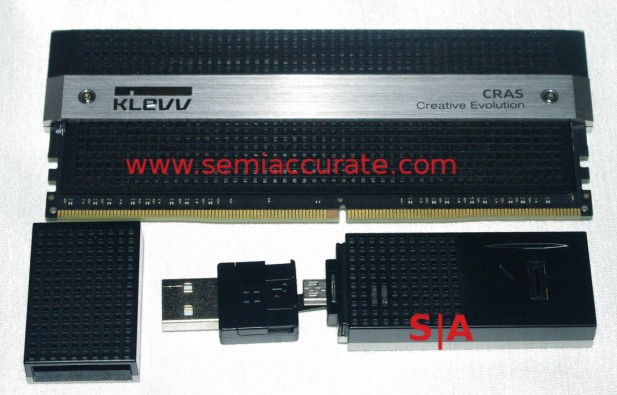 DDR4 comes in one variant from Klevv at the moment, it is called Cras and has a new visual theme. That square covered heat spreader is a multi-part metal affair put together with actual screws, or at least it looks like it is. Speeds run from DDR4/2133 to DDR4/3000, and it comes with LED on the top like Genuine. In a similar fashion to its DDR3 cousins, if you don’t want LEDs, just buy… umm… nothing, Cras is the only DDR4 line from Klevv at the moment so it is LEDs or LEDs, your choice. This is sure to change over the next few months, but given the platforms supporting DDR4 at the moment, it isn’t a bad decision on Klevv’s part.

As you might have noticed in the above picture, there is a memory stick under Cras, it is called Arma. In addition to the microUSB connector there is one other nice touch on Arma, a fingerprint reader. This is part of the reason a 64 or 128GB memory stick is so big, that circuitry takes space. The other part is that Arma is a prototype, the final version will be out in about three months and Klevv says it will be a lot smaller. Unfortunately we couldn’t try it out so we can’t say how the software works, maybe in a few months.

Since SK Hynix also makes flash, lots of flash, Arma is only the start of the planned Klevv flash offering. There will be SD and microSD cards, SSDs, and many other devices coming in the next few months, but no exact time tables were laid out during Computex. Like pedestrian DDR4 modules, expect these holes to be filled in as time passes.

In the end we have a new player in the retail memory market. Hynix is a known memory fab and makes some interesting parts, Klevv is just a marketing brand from the same corporate parent. Given the engineering resources and access they have, their future offerings could be quite interesting. At the moment things look good both from the product and the engineering side, keep an eye on this brand.S|A