Cavium Octeon Fusion-M is a base station on a chip

MWC 2015: For once a device that lives up to the marketing

Cavium is introducing a line of macro-cell base stations on a chip called the Octeon Fusion-M. While SemiAccurate normally scoffs at (anything)-on-a-chip marketing designations, this one has could really be what it claims.

The idea is simple, take a Cavium Octeon Fusion, not the pico-cell version but the full-scale variant, and add a DSP. This gives you everything you need for the data processing and everything you need for the signal processing in one place bar the actual radios. The block diagram looks eerily similar to past Cavium chips with an added blue box on the top left corner, see? 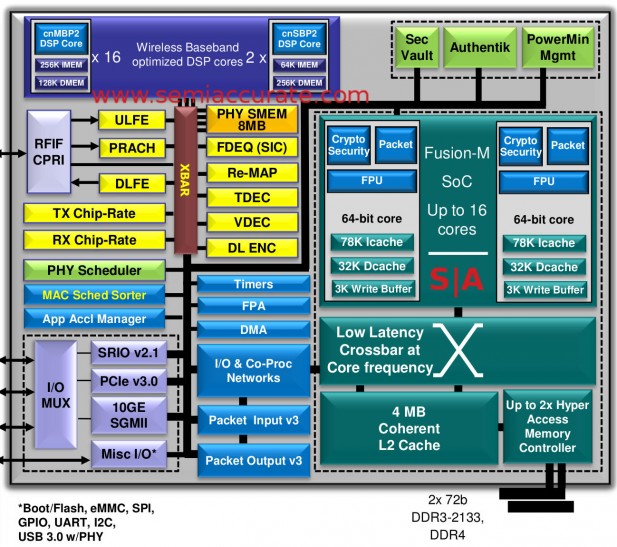 Block diagram of the Octeon Fusion-M

Officially this part makes up the CNF75xx line, a smaller CNF74xx variant will be released around the end of the year, both on 28nm. At the heart of the Fusion-M is the good old MIPS based Octeon 3 cores, up to 16 of them clocking to 1.6GHz with up to 4MB of L2 cache. On the memory side you have two channels of DDR3/2133 or DDR4, take your pick.

This is pretty conventional so far but the I/O side is not starting with 24 lanes of 12.5Gbps SerDes which you can specify in a number of ways like CPRI, 10GbE, SRIO, PCIe3, and more. Lets just say there is a lot of wired I/O on board plus Cavium claims up to 2.7Gbps, that is 1.8Gbps up and .9Gbps down on the radio side too. Since a single CNF75xx can support up to 3600 simultaneous cell users, that number isn’t a large as it sounds.

Supporting that many users is easy enough with wired connections but wireless is quite another story. In this case Cavium took care of that with a DSP block which has 16+2 cores. The +2 ones have a different memory complement with less IMem and more DMem, not sure exactly why though. There is a lot of DSP power here and it is complementary to the CPU cores, not a replacement for it.

This can be split up into a total of 24 sectors, 12 send and 12 receive, which you can arbitrarily assign to LTE-A, WCDMA/HSPDA+, or GSM. Since the CFN75xx can do 12+12 LTE-A sectors, using any of the other protocols should be almost trivial. That said if you want to have a single base station doing LTE, 3G and GSM, you can do it all with one chip. Plus a lot of passives, wires, antennas, and the like, but you get the idea, it is really mostly -on-a-chip.

One of the growing trends among cell phone vendors is the idea of splitting a tower into a radio and remote compute nodes. This is what you may have heard being called cloud RANs or C-RANs, the air side stuff is at the tower, the number crunching is remote and centralized for a bunch of towers. There are arguments for and against the shift but since LTE has a 1ms delay tolerance at the core of the spec, it is technically quite possible. Cavium claims to have tested this up to 20Km away with longer distances possible.

The only problems with doing a C-RAN is a practical concern, where do you split the workload into a part done on the radio side and the rest at a remote centralized location. The one thing everyone agrees on is that MAC scheduling, essentially assigning what timeslice gets assigned to what specific device, is going to be done on the radio side. From there everything else is a tradeoff. 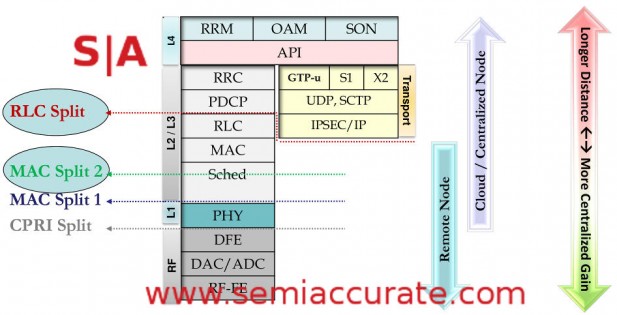 If you get networking, you know why this is hard

That tradeoff is illustrated above with different parties pushing for slightly different splits mainly based on what their products do best. It probably doesn’t matter exactly where the split ends up as long as there are standards for everyone to design against, all will be good. As you might have guessed, things aren’t at that point yet but C-RANs are being built out, some vendors can’t wait.

Cavium’s offering in the C-RAN space is not the CNF75xx but the smaller CNF74xx paired with a ThunderX on the ‘cloud’ side. The idea is simple enough, put a lower power more efficient device on the radio side and do the heavy lifting in a remote data center. The CNF74xx has up to eight Octeon 3 cores at up to 2GHz and a lesser complement of everything else. The split is done at the MAC/PHY level, effectively the “MAC Split 2” above.

This allows for pooling of all the rest of the processing at a remote data center which can be 10km away or more. You can have multiple towers in a metro area all feeding the same data center for higher utilization of available compute resources, space, and fiber connections. Carriers love words like efficiency, low-cost, and centralized management which C-RANs aim to deliver.

That is what Cavium launched at MWC this year, the CNF75xx and CNF74xx lines. One aims to do nearly everything a macro cell needs on a chip, the rest aims to do everything a C-RAN needs on two chips. Since both are based on the current and proven Octeon and Octeon Fusion lines with an added DSP block, they should both accomplish the task at hand with little drama. Cavium may really have a macro-cell-on-a-chip.S|A