Microsoft admits their image is a net consumer negative

Realization comes hard but brings a glimer of hope with it

Microsoft has failed and while some think it is blissfully ignorant of that fact, the XBox One shows that the company is indeed aware of its plight. How aware is it that its reputation and name is indelibly tarnished? Deeply.

Before you dismiss that fact that Microsoft is ashamed of its own reputation, take a look the following picture, an XBox One retail display. It was tweeted by the UK retailer called Game here. Look closely at the display. What does it say to you? No, not this message even though it is bang on, think about the message that the display is trying to convey. 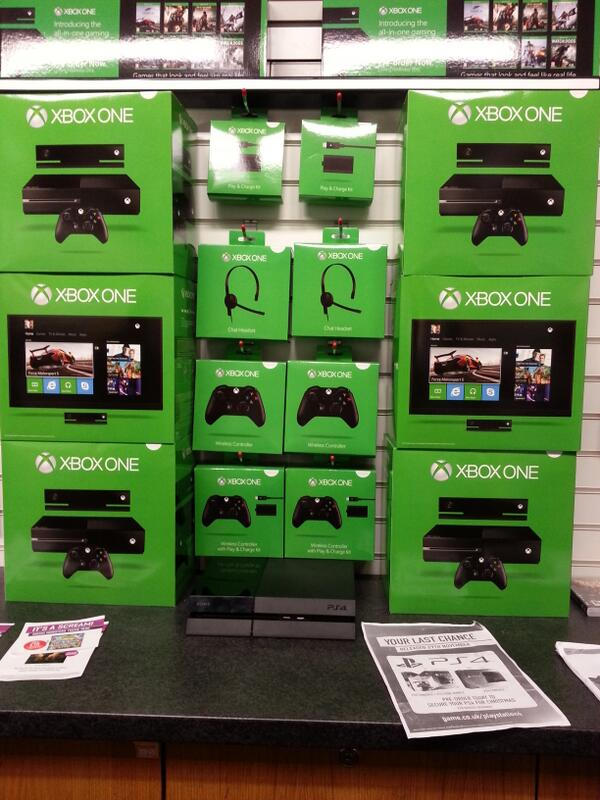 A sea of green with one thing missing

The XBox One is probably the only Microsoft product for the past few years that has anything like a consumer buzz about it.  This may only last until people can compare it to the PS4 head to head on similar games, the XBox One will get obliterated. Until then however it is a desirable product and that is unique to Microsoft’s lineup. The rest of the lineup is about as desired as an unexplained rash after a night out drinking in Tijuana, at least by looking at sales numbers.

So have you realized what isn’t in the picture yet? If you said a Microsoft logo or any other related corporate branding you would be right on. Sure the box is another cheap attempt to copy Apple and just like the Microsoft Store they copied the layouts but not the style, flair, or panache. It just looks like a hideous green blob that hurts your eyes, elegance is not the strong suite here.

More importantly, the problem for Microsoft is that it is so ashamed of its consumer image that it won’t put its own name on the packaging, front or back. While they may try to spin this as simply minimalist packaging or the like; the fact that the one thing people want doesn’t have the corporate name on it is startling. This is strong evidence that Microsoft has driven their name in to the mud to the point that it is a negative, and done it for so long that they have to act on it or lose what little reputation they have left. All they would do by putting the Microsoft name on the box is hurt sales so they didn’t. Good move, at least in the short-term.

The problem is twofold, corporate identity and what they sacrificed to get here. First is the corporate identity issue. At the moment, Microsoft is desperately trying to force its way in to phones and tablets by making a common UI for both mobile and desktop. In theory this allows one to have a common set of apps, a familiar interface, and impart the ability to move from PC to mobile and back with ease. One UI to rule them all, one UI to in the darkness bind them.

Unfortunately what they gave up to make this Hail Mary play was far more valuable. By putting their inappropriate for the use case OS on the desktop, worse yet forcing it on users, they destroyed sales. Not content with 2-3% of mobile sales they also did the unthinkable and moved the same UI to servers, it seems losing 30%+ marketshare over 5 years was not a sufficient clue.

XBox One too (pun intended) was not immune to this UI, this whole top to bottom UI familiarity was one of the main reasons the XBox division was not spun off a while ago. Once again the idea was to have a brilliant UI in all devices from top to bottom that people saw, used, and were comfortable with, even teen-aged gamers. Except the UI wasn’t brilliant. And people didn’t love it. And it didn’t spur sales. And there was no backup plan. And Microsoft is still shoving it down buyer’s throats, or at least trying to.

The net result of this brilliant plan? Windows 8 drove PC sales down by double-digit percentages every quarter since release, a stunning number for an ~300M unit market. There are no signs of recovery anywhere and unfortunately the competition is still doing a brisk business. Macroeconomic issues are not the culprit as some deniers contend. Similarly servers have lost more than half their market share in the last five years but that is unquestionably not tied to the new UI. SemiAccurate’s anecdotal evidence says that this share loss has accelerated since the release of Server 2012, something that is quite likely due to the new UI. Phones too have gone from ~12% market share pre-Windows Phone 7 to <3% marketshare now, again something that is directly attributable to the new UI.

If sales are any indication, people really don’t like this new UI and by proxy don’t like Microsoft. Just ask any teenager if they think Microsoft products other than the XBox are cool or desirable if you don’t believe me. Do the same at any coffee shop and then ask the same question about Apple products. How bad is it? Bad enough that Microsoft won’t put their name on the one product they make that buyers think positively about. This wasn’t by accident. Microsoft has failed and they know it, the XBox One box is proof of that.S|A