Innodisk helps put 57TB of DRAM in a system

It is quite rare to go to a memory company at a trade show and see more interesting things than you can fit in to an article but Innodisk did just that at Computex. With that in mind lets take a look at the memory goodies from Innodisk, we’ll look at the equally interesting flash side later.

The first thing you notice at the Innodisk booth is a fairly large breadth of DDR4 DIMMs, impressive on the surface but when you look in to the details it only gets better. The DIMMs themselves come in 4-18 device sizes, the four is almost assuredly single sided but there could be up to 18 more on the back of the top version. These are not your ordinary DRAM chips though, they are full TSV stacked devices with 16Gb/2GB per chip. Multiply that by four and you have 8GB for the ‘entry level’ part, and a rather insane 128GB (plus ECC) , 256GB if it is double-sided for the largest. This is likely due to DDR4’s requirement for one DIMM per channel though but it looks like the density will make up for that drawback. 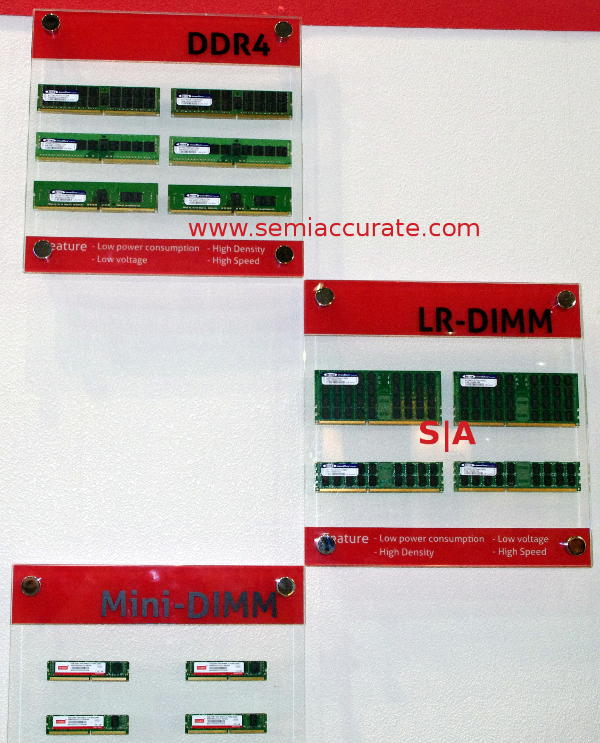 See the big DIMMs below the fast DIMMs

Then take a look at the LR-DIMMs just below the DDR4, they are not single sided either. The chips are 8Gb devices and there are 72 of them on this not-quite standard form factor device. Why do you need 64GB per DIMM? Can’t you just use more 32GB DIMMs to make up for it? That was when Innodisk said the thing that really floored us, this DIMM is made for a specific customer for a rather specific box. That box uses over 900 of these DIMMs or well over 57TB of DRAM in a single device. Think about that, have you ever even seen a PC with 57TB of storage? All Innodisk would say is that it is for a large router, and given the specs we don’t doubt the large bit. HPC users are also interested in these capacities but probably use substantially less than 900 per box.

Moving to the other end of the spectrum we come to the Mini-DIMMs on the bottom. These are not a JEDEC standard,  just a custom size requested by an unnamed customer. They are shorter than a SO-DIMM but narrower than a standard DIMM making them, umm, custom. If you really need a different size memory module, Innodisk will make it for you. 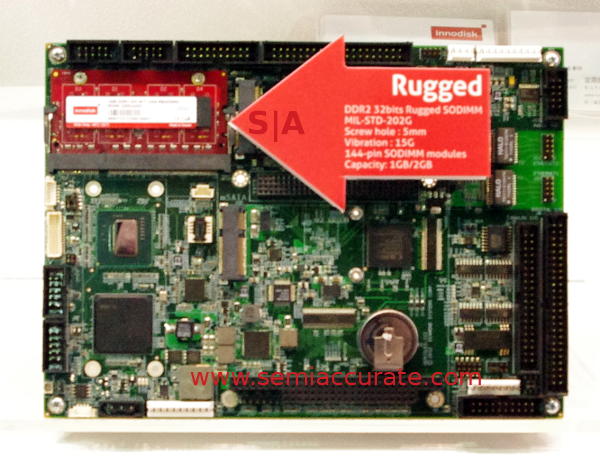 If you want to be sure, screw your memory

Speaking of custom DIMMs, take a look at this ruggedized SO-DIMM. It is a DDR2 module for a custom board but the interesting part is the two screws on the top. Yes this is a screw down DIMM, you put it in the socket like normal then literally screw it down. This is unlikely to vibrate free of its mounting or get accidentally knocked out, but if you are still worried there is always Loctite. If you are serious about reliability you do things like this because it is the only way to be certain, and this module is rated to 50G shocks.

More importantly is the application for this ruggedized SO-DIMM, it is intended for military applications. This is obviously useful for vehicles that are meant to be hit by gunfire and explosives, but the other feature is just as critical. These DIMMs have a proprietary fast bleed tech in them that will pull all the data out of the cells in <5 seconds after power down. For most applications this is not a concern but for sensitive military data it is actually a matter of life and death. Should you need fast bleed memory, Innodisk has it.

Right next to that was a display of ECC SO-DIMMs, another uncommon form factor for server memory. It was however plugged in to a Calxeda board so if you were wondering who would use this kind of device, think microservers. These will be in pretty high demand in short order, watch that space if you care about memory.

Last up we come to the most important parts of memory, at least to the industrial set. That would of course be memory that works in unusual and harsh environments. Innodisk lists three things for this crowd, coatings, wide temp ranges, and different sizes. The coatings are for dust proofing, moisture proofing, most chemical proofing, and UV resistance. You can get MIL-STD-202G compliant DIMMs too, just ask.

The wide temp ranges are different solder types, thicker gold-plated contacts, and more under the hood. In the end this buys you operating ranges from -40C to +85C, more than enough for most overclockers but not enough for most industrial applications, nothing ever is. Last up we have form factors like the screwholes for ruggedization. That is only the beginning though, like the Mini-DIMMs above Innodisk will build them to whatever size you want them to.

In the end, the sheer range of the Innodisk offerings is pretty amazing. You can get 64GB DDR3 DIMMs off the shelf and have them coated to resist most things you can throw at them. If you don’t see what you want in the catalog you can get it custom-made, coated, and anything else you want. For those pining for more than 57TB of DRAM in your next system, by the time it arrives in the mail DRAM densities will probably have gone up enough to meet your needs. And now you know who you can buy them from.S|A