IDT was showing off a bunch of chips that can best be described as essential plumbing during MWC. You may not know many of their products, but many of your devices use their silicon in one way or another.

At MWC, there were three demos shown off, compression IP, MIMO aware D to A converters, and RapidIO switches. None of these are anything you would buy unless you are designing high end cellular hardware, but if you use a cell phone, the call probably used their tech somewhere along the line. Unfortunately for IDT, plumbing isn’t usually called out by anyone, much less considered sexy, just essential and hopefully unseen by the end user.

The first product up is a RapidIO switch, JESD204B for the EE literate, a 6.25Gbps I/O standard for embedded devices. It is for the embedded world what PCIe is to the PC folk, a standard interconnect for chip to chip communications. If you want to hook an FPGA up to a DSP in you base station, this is what you will probably use. There were two JESD204B chips on tap at MWC, the aforementioned MIMO D to A converter and a switch.

On the DAC side, the DAC1658D1G5-MDS demo was pretty simple, take a digital signal and turn it in to an analog signal, old hat in the comms world. If you are sending multiple signals for the same data stream in a MIMO fashion, you need to keep the two waveforms in sync. Actually you don’t absolutely need to, but it makes life much easier if you do. In the demo below, IDT was showing off a solution that keeps the three signals from three DACs in sync. 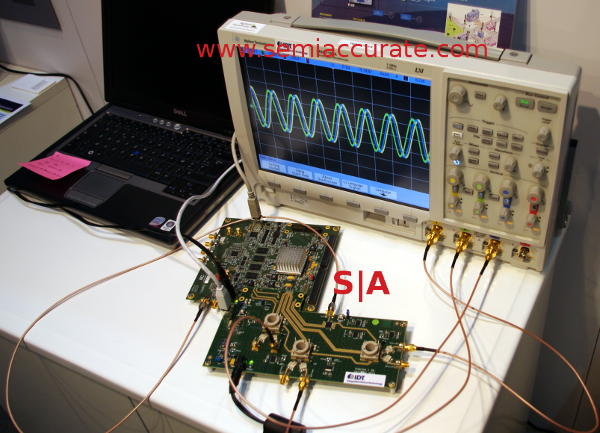 MDS stands for Multiple Device Synchronization, in this case up to eight DACs can be lined up and made to work together to prevent problems in the data stream. For those well versed in EE matters, this probably falls under the heading of, “Nice to have built-in so we don’t have to do it the hard way every time“. For the non-EE versed it means, “Press the magic button and the three colored lines become one line“, usually quickly followed by a deeply meaningful conversation about Britney Spears or Dancing With the Stars. From SemiAccurate’s point of view, we’ll take the EE-versed any day, semiconductor physics chat or not.

The other part of this is a JESD204B switch that IDT offers. On the digital side, moving things from chip to chip is easy as long as there are point connections, but if you get a bit more complex things get messy. Switches help and let you do all sorts of useful things like connecting a single input to multiple outputs, or splitting and combining lanes. IDT was showing off a 48 lane switch capable of up to 16 ports each at up to 20Gbps. For the non-DWTS group, that would be 4 lanes per, it uses 8b/10b signaling for 5Gbps/lane throughput. For the DWTS enthusiasts out there, the commercial is probably over, go away.

Last up is a demo of the IDT I2Q compression IP. The idea behind I2Q is simple, if you have a base station in place with copper cabling and you need to upgrade it to 3G or 4G service, you have a problem. More bandwidth means laying down fiber, a painfully expensive proposition. Newer towers probably had fiber laid when they were built, but most cell towers are not new and a lot of them are out in the middle of nowhere. 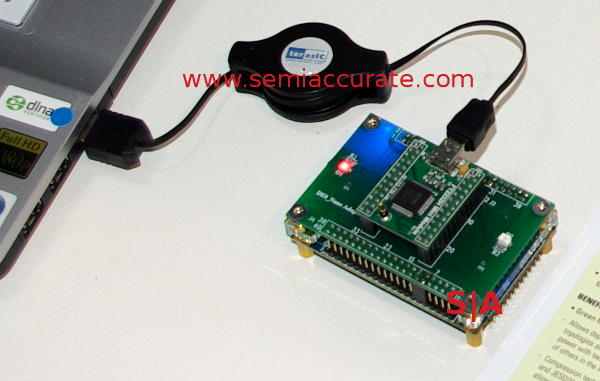 This is what real IP look like in physical form

If you need more bandwidth, the easiest way to get it is to compress the signal, and that is just what the I2Q algorithms do. IDT says that it will get you between 2-4x compression between the radio and the base station, enough to make this tech cost-effective. While the license from IDT probably isn’t free, nor is the FPGA this one is running on, it is certainly a lot cheaper than running glass out to that hill on farmer Jed’s land. Safer too, he gets mighty peeved when people interrupt his DWTS time, so I2Q might even save your field tech from a rock salt loaded shotgun blast or two. Now that is a useful algorithm.S|A