AMD HD8950 spotted in the wild and pictured

As is normal at CES, when you see streams of blue tinged moles all going in the same direction, you follow them. This year, they got it right again, and lead SemiAccurate to a backroom hotel suite with an AMD HD8950 in it.

We first told you about the Sea Islands (CI) line back in October saying that it was a mild warming over of the current Southern Islands (SI)/HD7xxx line. Any delays to it are not because of technical problems, but marketing. That said, the cards are done, fully baked and stable. If you look at the BIOS dates in the picture below, you can see that they have been ready for quite a while. No technical problems.

We are sworn to secrecy on this part, so we can’t divulge a lot of the details including pictures of the card itself, but we do have them. The reason for that is that it would give away the identity of the nice folk who told us about the device, and we don’t want to do that. We will describe the card by saying it is a dead ringer for the HD79xx line, no real changes to the case that we noticed, but we didn’t have the two generations side by side. At least in this sample, the case could be reused from a 79xx device. 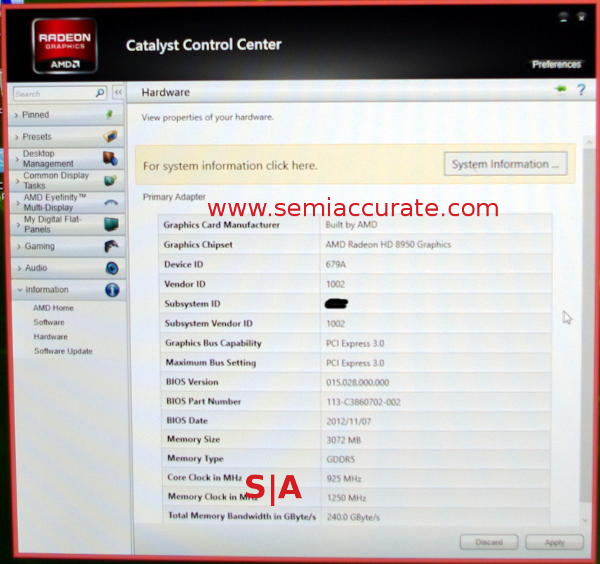 The specs, or at least some of them

The card itself is an HD8950, full production part, ready to go. As you can see, the BIOS is dated November 7, 2012, so that tells you the state of things. If they were ready to ship to customers 2+ months ago, there aren’t major technical hurdles delaying it until March or April. This 8950 was shown off under load, and it exhibited none of the usual pre-production hiccups or glitches, and was rock stable for the hour or two we were near it.

Unfortunately the rest we were asked not to divulge. That said, a 15% clock boost lines up nicely with the 15% speed increase we mentioned last October quite well. A few other architectural optimizations, a few more driver tweaks, and you have something between the 15% realistic number we claimed and the 30% AMD was claiming last summer. It is good to know our sources are still dead on. Pet the moles for us guys, and scratch the little guy behind the ears, he likes that.S|A