Lately, Powercolor has been first in the ‘My card has more than yours’ sweepstakes, and Computex was no exception. The nice part was that wasn’t all they had for enthusiasts.

The most obvious part they were showing was a dual HD7970 card called the Devil 13, two 7970s on a PCB. This is different from the impending New Zealand/HD7990 because that card uses selected low leakage GPUs, and is usually clocked down a tad from stock to keep power in check. 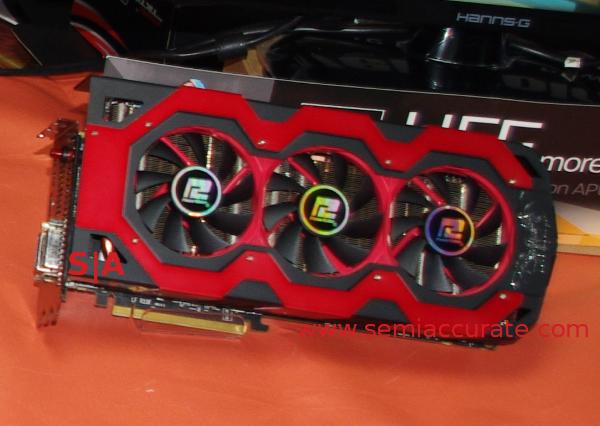 As you can see, this is a big card, as tall as possible, and uses three slots for cooling. Why? Three 8-pin PEG power connectors might be a tip, as are the rows of power circuitry all over the board. To cool things, there are three large fans on a black and red themed metal shroud, and enough themed stickers to make it look fairly sinister. 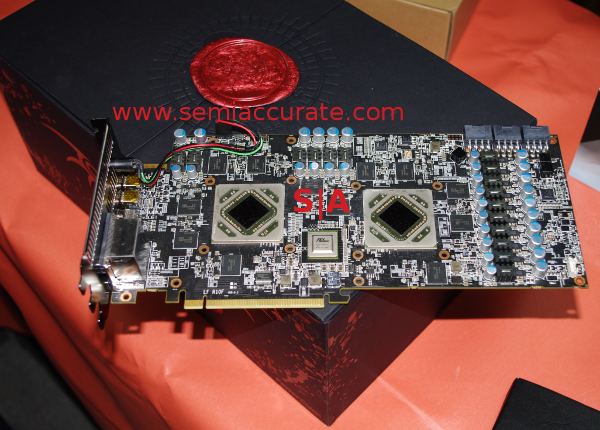 Laid bare on the box

The best part about the card is quite possibly not the GPU, strange though that might seem, it is the box. Yes, THE BOX. Please note that movie reference/pun was intentional. Anyway, the box itself is a work of art, matte black with glossy black and red lettering for a very high end look. Scratch that, it is not just a look, it is high end. Take a look at the seal on the top, design touches like that are not accidental.

The top butterflies open and there are several other sub trays and containers each as high end as the first. Basically, it is a really nice box for a really high end card. If you are thinking that it will be expensive, you are right, but as is the norm these days, dual cards are borderline silly priced, and this will be at the high end of the crop. That said, if you can afford it, I can’t see any reason why you would pick a generic card over this one, even if it costs a bit more.

To take a hard left turn, Powercolor has two new fans, a production Vortex III and a concept part. The Vortex II was a device that allowed you to raise the height of the fan, basically trading one slot for extra cooling. It worked, but was a bit fidgety to deal with at times. The third iteration is much easier, with a little slider on the rim that allows you to set the height and therefor airflow with one finger. 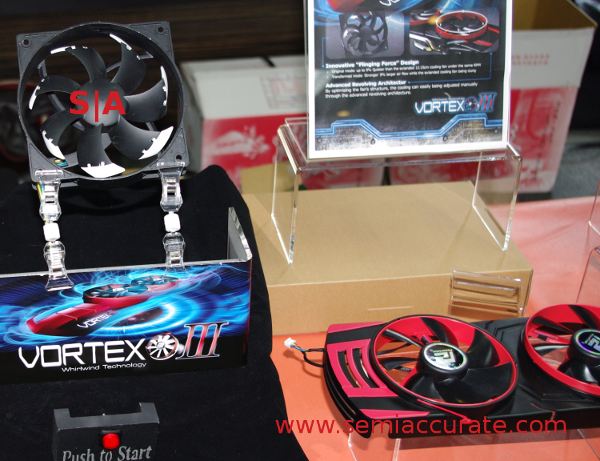 The other fan is a bit more interesting, the ends of the blades are spring loaded extensions, the white parts above. When the fan is at low speed, they are retracted and quiet. As the fan speeds up, centrifugal force opens them up progressively and effectively lengthens the blades. This adds airflow, Powercolor says 9% or so, but also a bit of noise. If your GPU has decent fan control, it could very well be a best of both worlds device, but until it comes out, it will simply be a very interesting idea.S|A