AFDS 2012: More than a digital portal for the regular AFDS event

With the conclusion of this year’s AMD AFDS 2012 event, one would remember the number of major announcements that AMD made during the past three days, and imagine what AMD will bring to the table for next year’s event.

With the first fruits of AMD-ARM co-operation, the HSA Foundation with HSA specification version 1.0, the first AMD APU with ARM TrustZone technology, the version 1.0 of the Multi-dimensional Audio from the 3D Audio Alliance founded by AMD and SRS Labs, and AMD Wireless Display technology with the Media SDK they have just detailed to the AFDS attendees, one would also imagine the evolution of heterogeneous computing into next year and the near term with the introduction of unified profiling and debugging tool CodeXL, the new roadmap indicating an entry to the low-end server market for APUs in 2013 and new AMD-based SeaMicro system with 512 Bulldozer cores in a 10U chassis available in December 2012, and possible Trinity-based SeaMicro offerings.

Before all that, the author would really want to praise the introduction of the digital version of AFDS, dubbed AFDS-D, a web-based environment for online expos and webcasts from the company INXPO, to bring an excellent online experience for those who cannot attend the AFDS event in person this year. 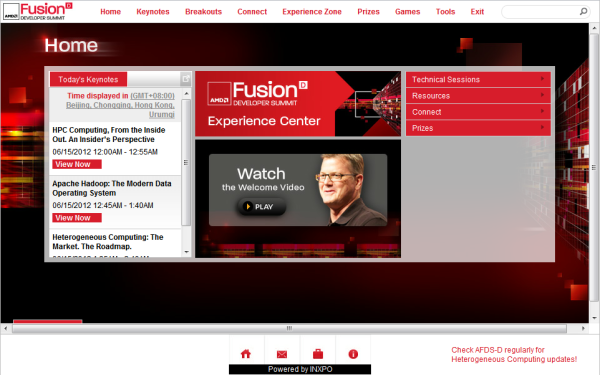 The main page of AFDS-D after login

What this application does is more than just live webcasts of keynotes, or a simple post-even archive of videos and PDFs, AFDS-D does way more than that. AFDS-D attendees can participate into several selected breakout sessions along with the Q&A sessions live by typing questions and sending, just like attending the sessions in person, there are a total of 10 breakout sessions throughout the three days of the AFDS event that are opened to AFDS-D attendees.

(Author’s note: You can find the link to AFDS-D here, or download the app for iOS 4.0+ or Android 2.2+, the app versions provide the same experience as the webpage version for those who liked to know about AFDS-D on their tablets and/or smartphones. All three require simple registration.)

One feature this forgetful author likes is the pop-up reminders on AFDS-D interface along with email notifications for upcoming keynotes, which is very useful when the author is distracted by other stuff like trace amount of caffeine and/or theobromine intake. The digital portal also features on-demand viewing of the keynotes and the above selected sessions the attendees have missed at a later time, all instantly uploaded after the sessions.

The other usual features like video demonstrations from AMD and event sponsors in the AFDS-D experience zone, mini games along with the social elements like chatting are not bad, but the author don’t find the majority of attendees using it, could be simply due to them not being in the spotlight.

When it comes to the wish list for improvements, the author only has two items. The first one being Twitter integration, this would be a really nice addition to the already good AFDS-D experience, and is supported by INXPO. The other thing would be the webcast schedule shown on the AFDS-D. That could be refined if the keynotes are back-to-back, so splitting it into two or three events by keynote topic is not ideal for AFDS-D attendees, as they have to go back to the keynote screen and view another webcast stream and wait for it to start playing. But then, these are very minor items, surely improving it will make the experience even more complete.

Of course, the AFDS-D also serves physical attendees of the AFDS 2012 event, as an electronic AFDS resources portal with the PDF files and replays of keynote webcasts, to augment the experience at the AFDS 2012 event. And although the AFDS 2012 events have just ended, the AFDS-D will be continuously updated on the other sessions with presentations and video playback, additional videos and some more questions and answers throughout the year till the next AFDS event.

Overall, the impression to AFDS-D is very good, I have tried both the web and mobile app versions, the user interface and the webcast streaming are smooth, and interaction with the UI is also good. The author would certainly hope to participate in AFDS-D next year, or even have the chance to attend AFDS 2013 in person. S|A

Author at SemiAccurate
Leo Yim is our correspondent from the far flung reaches of East Asia. Fluent in Mandarin, Cantonese and English he'd rather be talking about computers no matter what language. A true detail man he dreams of building gaming rigs from workstation class parts.