Unlike most talks on the subject, Kongregate used real world numbers and lots of them.

The idea is simple, if you are making a game for online play, there are several options on how to generate income from it, some of which work better than others. Many work well, others fall flat, and once again, tried and true wisdom doesn’t come close to some of the things Kongregate was seeing. Even if you don’t do the right thing from the start, things can still be turned around, and money can be made as long as the underlying game is actually fun.

Kongregate makes money by selling games and items in games, sharing their revenue with the authors. The company has their own currency called Kreds, and that is where the majority of the revenue comes through, even though only about .5% of the games use it. There was a learning curve on where to apply Kreds, but that knowledge has been gained the hard way, and now the system is applied in a much more sensible way. Given the revenues, it also seems to be working well.

Users are split in to three categories, Player, Reg, and Addict. Players are a class of people that have loaded the game, Regs have played it at least 10 times, and Addicts up the play count to 50+. From there, they are looked at from an ARPU (Average Revenue Per User) and ARPPU (Average Revenue Per Paying User) perspective. In case it is not obvious, Addicts are more desirable than Players, and any that pay are a good thing.

There are several fairly obvious conclusions you can draw just from the classes that Kongregate has drawn up. The more a player plays, the more likely they are to buy the game, or buy things in the game. Paying users are worth their weight in Kreds, and ARPU goes up dramatically with each conversion to a paying user. So you want people who play a lot and buy a lot, so make a game addictive and fun, and price it cheaply, right? Wrong.

The first lesson that was learned is that underpricing your game is worse than overpricing, within certain limits. Most games only have about half a percent of users who pay for the game, and they probably play it a lot. If your game allows in-game item purchases and you start out low, it is very hard to drive that price up without user dissatisfaction. If you price it high from the start, you can always run sales, volume discounts, or just make things worth buying to the user.

Two games were used to highlight where the money comes from once you convert a user to a paying user. They were called High ARPPU and Low ARPPU games, with spending being $119 and $24 average, and medians spends of $16 and $5. If you are good with statistics, you will immediately see one thing, there are a small number of players that spend a lot of money on a game, and they are called Whales. Whales are the most important class of user, and they can make or break your game’s profitability.

How many Whales are there? Not many, but they are disproportionately powerful. In the high ARPPU game, a Whale is defined as someone who spends more than $500 on the game. <2% of the players spend >$1000, and they account for 40% of the revenue. Remember, that is 2% of the half percent who end up spending anything, so a vanishingly small number of users contribute 40% of the revenue. One of the users spent more than $6700 on the game, how many $24 median players does the game need to average $116 with one of these Whales? Similarly, 90% of revenue comes from players who spend $100 or more.

Lesson #1: Make sure your players can spend $1000+. The few lunatics that do are well worth it. While you may not want to ever meet one of these ‘valued customers’ in person, you want them playing your game. If your game makes it pointless to spend the money, they won’t spend even if they want to and can. This ties in to Lesson #2: Don’t underprice.

The Low ARPPU game had one problem that capped its revenue, when you bought things, they were good forever, and after a point, you were powerful enough to do anything. High ARPPU games allow much more progression, or have items of limited use, duration, and ones that wear out. Or the challenges get commensurately greater with each step the player takes. If it didn’t, buying that +17 sword would not be worth it when you already have a +15 one. It takes work, but the numbers show that it does pay off.

Now that you know how to set the prices in your game and to allow people to spend money in the right ways, you want to keep them playing your game. If they can spend, but never play, they won’t spend the money you so desperately crave. How do you keep them around? Insanely fun games are the first thought most have, but, well, they are not the best way. This isn’t to say that fun is not good, it is, but the real digital crack is the social aspect.

The pipe for that digital crack is guilds and clans, if you want to make a successful game, you have to have them. Fun will draw people in, but it eventually gets old. This makes players move on, and that is bad for revenue. If there are clans, there is a social element to the game, and social pressures to keep logging on.

If you have guilds, you have the online equivalent of your neighborhood bar. If you have guild warfare and raids that only work when a single clan tries it, you damn well better be there when someone wants to run a raid. If not, your friends don’t like you. This, it turns out, is the true digital crack, and it makes an Addict one where his friends don’t pull an intervention unless he tries to quit.

There is only one thing worst than crack, and that is heroin and crack, both digital in this case. Once they are in a guild, how can you make it worse for the player? Easy, have items that you can buy for your entire guild, and only for your guild. Buy the golden widget of eternal happiness, and you are happy, but your guildmates also get a +1 replica of your character to keep as well for free. The next time you log on, everyone is glad to see you, and thanks you for adding a +1 to their thingy. Now you are on two drugs, and your friends encourage you to take another hit.

Rule #3: Look to the end-game first codifies the guild retention strategy. If you know how to keep players who are hooked from leaving, they won’t leave, and will keep spending. If you know how that mechanic works, once you get them in with fun, spending with #1 and #2, keep them there as the third leg of the race. Then your bank account wins, and the coins minted in your honor will have whales on them.

Kongregate went in to three case studies on how to do a game, and how not to. The first one was a slow vs fast starting game, basically low vs steep learning curves. Both ended up in the roughly the same spot, with the easy and fun game making less per person, but having more players each contributing a little bit. The hard complex sim had a lot less users, but once they got in to the game, they stayed and spent a lot of cash.

This last one had an item priced at $5000. Yes, $5000 for a single item in a ‘freemium’ game. The talk didn’t mention what that item was, or if anyone purchased it, but the company seems to have taken Rule #1 to heart.

So, which one was the better option, fast or slow? It turns out that the best of the games do both, easy to get in to, and a steep and progressively more complex game to follow. Get them hooked, then add zeros to the price as users go deeper and deeper in to the rabbit hole. Scary stuff indeed.

Next up was a case study about a game that had essentially no mechanisms to do any of the above, from content sales to additions, it was just a game you played. With a lot of updates, the company took a successful game, added in game items, expansion packs, and all the other bits that make money, and kept on developing. That small user base grew and grew, and was successfully monetized. Moral of this story, you can fix a game that doesn’t make money if players like it. If you have a bad game, you won’t have many players, but a good game can be made profitable even if it isn’t right now.

The last case study was about a game that was initially very popular, and the developer did well, but then didn’t provide any expansions or updates. The game started slipping to a shadow of it’s former self, but was somewhat revitalized by a promotion, then a major update in the form of a new version. Unfortunately, while these changes made temporary upswings for the game, and some users were retained, they never won back more than a small fraction of their peak audience. This is the red line ‘Asian MMO’ in graph below. 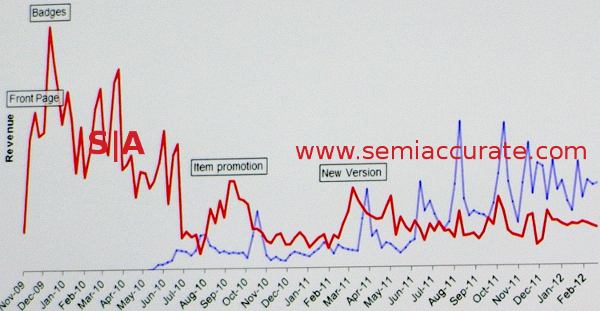 A tale of two games, one happy, one sad

Conversely, Fantasy Online, the blue line above, started out slow, but the developer kept adding content, addressing issues, and is keeping things fresh. The audience grew, and expansion packs were added, more people came in, and the revenue was used to make more content. As the developer keeps adding content, the user base keeps growing. Users not lost don’t have to be enticed back, and that is easier than the other way around.

Overall, the goals are simple, make a game people want to play. Then, keep them entertained, challenged, and coming back as much as you can. If they start to spend money on your game, the absolute worst thing you can do is prevent them from doing so. Any reason for someone not to spend money is bad for you, so minimize them. Last, keep your game fresh, losing users is hard to recover from. You can fix problems if people like you, but if they go, they are gone. If you do all these things right, not only will not just have users, you will have profitable users.S|A