In case you haven’t been paying attention, it is roadmap season at AMD, and now it is Desktop CPU time. A big welcome goes out to Vishera, Kaveri, and Kabini. 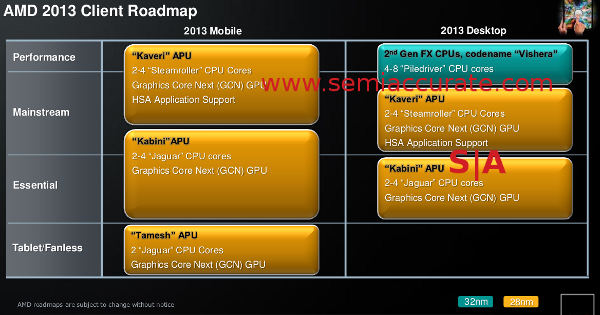 The roadmap as shown

This time, it isn’t exactly anything we weren’t expecting, with two of the three code names, Kabini and Kaveri, floating for a long time. Vishera is new, but the chip itself is basically a Piledriver server CPU in desktop form. Nothing too spectacular.

More interesting is Kaveri, the successor to Trinity. It will have a Steamroller CPU core, likely the first chip on the market with it. It also has a GCN/Southern Islands/HD7000 GPU, plus today’s obligatory catch phrase, HSA. This is where it begins.

A bit lower on the scale is Kabini, the next generation Brazos replacement. It uses Jaguar cores and GCN GPUs shaders, but should be familiar to anyone following the space. Once again, the interesting part is less with the chips themselves, but who else puts IP in their own potential variants. Hang on folks, this is going to be interesting.S|A