Caught in the act, Intel has a woodscrew moment

Intel Ivy Bridge graphics are still so broken that company executives have to lie about it to the assembled press. Yes, I did say lie, and it is a direct deception, as intended.

The story is the same sad one that has been going on for a while, and Intel got caught with their pants down this time. The claim is that Ivy Bridge has acceptable graphics, and it can play DX11 games in Ultrathin form factors no less. In case you haven’t been paying attention, we have laid out why they can’t possibly do so, and point out Intel’s still badly broken drivers. The flagship Intel CPU still lacks functional drivers more than a year after it’s debut, and will do so until it is replaced.

Could it get worse for Intel and graphics? Not unless they actively try, and that is exactly what they did. Intel is under a lot of pressure on graphics, they are way behind, and losing ground to everyone. Their GPUs haven’t worked right since the architecture was introduced in the G965 in 2006, and they still don’t. The company will not stop promising that the next generation will work right, and just like Itanium, the next generation never does.

The problem for Intel is that they are promoting their new Ultrathin notebooks as graphical monsters.  Unfortunately the hardware is lacking and the software drivers don’t work. When you have a press conference to tout the things you promised, and they don’t work, what do you do? Claim it is pre-production hardware, and there are glitches? Bin parts until you get one that will fit the intended spec? Try very hard to get code that works on your demo? All those are routinely done in press conferences.

What isn’t routinely done, although it does happen, is outright lying about what is going on. What is even more rare is that the company gets caught, blatantly, in the act. Sadly, Intel’s Mooly Eden did just this at today’s press and analyst briefing. I am not using the word lie lightly, but in this case, I can’t see, nor has anyone offered a good explanation as to what else it possibly could be.

At the media and press briefing, Intel’s Mooly Eden was showing off an Ultrathin with an Ivy Bridge CPU, and claimed it could and was running a DX11 game. When he started the game, the control panel for VLC popped up. VLC is a media player, the ‘game’ was a recorded movie. If you watch the video, you can clearly see the screw up in the first few seconds. 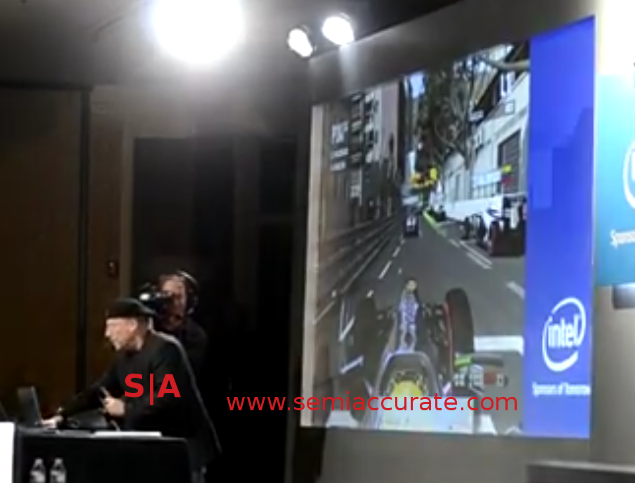 Cropped frame from the video

The demo started out badly and choppy, and it was immediately obvious to any fool watching that Mooly was not actually playing the game. It was worse than a 1950s TV sitcom with the father ‘driving’ the family with a badly projected video out the ‘back window’. The audience was so unconvinced that Mooly very quickly gave up the charade and admitted that it was being “run from back stage.” This isn’t a bad or really unethical thing at all, it happens all the time. The problem? Look closely at the picture below, the red circled bit. That is a VLC control panel. It isn’t a game running on Ivy Bridge, it is a movie. What is it running on? Very likely not “from backstage”. Why do we say that? Watch the video to understand this better

If you look at the rest of the image, or the video, the key pressed is where the media playback buttons usually reside on a computer. If you were playing the game, you would start it from the wheel controller, not the media playback buttons. I don’t know what model Ultrathin this was, so this is not a definitive answer, but it sure looks suspicious. Worse yet, what you see on the video backs up the above scenario.

Why is this all problematic? This all took place at the CES Media and Analysts Briefing, and yes, there were financial analysts present. The author confirmed that with several people in attendance. Intel’s Mooly Eden claimed that the demo shown to the audience was a DX11 running on Ivy Bridge, live, on January 9, 2012. It was not, and he knew it. That my friends is a direct lie, intended to deceive both the press and analysts covering the company. Only after the charade was up did he belatedly and angrily admit it was a ruse. Until that point, the intent was to deceive.

To make matters worse, you have to wonder how bad Intel graphics on Ivy Bridge really are? They clearly can not demonstrate a simple DX11 game running on the platform of their choice less than a quarter before launch. The pre-launch claims of for DX11 on Sandy Bridge were never met, and have been subsequently dropped. The claims for DX10.1 on Cedar Trail were wiped from the launch material, or most of it anyway.

To date, Intel is dropping farther and farther behind in graphics while precluding others from offering viable alternatives. It is a classic monopoly tactic, and it only works if you can deliver a product that works too. In this case, Intel clearly can not. So they lied about it. Sad.S|A

Update: SemiAccurate asked Intel for a response on what happened. It came after the story was completed, and does nothing to change our mind about what happened. It is presented without comment, but feel free to do so either below or in the forums. Compare it to the video and decide for yourself how credible either scenario is.

Intel’s official response to the incident:

“We used a video in the DX11 Ivy Bridge-based Ultrabook demo simply for expediency at today’s Intel press event at CES. We were extremely limited for time and didn’t want to lose any time by getting in and out of the game. And Mooly told the audience this at the end of the demo… a couple of people have posted video of the demo on YouTube and you can hear Mooly say that the demo was driven by the folks behind the stage because he was limited for time and then went on to explain the DX11 support in Ivy Bridge.

We first demonstrated the Dx11 feature of Ivy Bridge at IDF last September. It runs extremely well. The demo can easily be reproduced live for anyone who wants to see it. We’d be happy to show it to you and let you play DX11 games the next time you are in Santa Clara.”

The original story can be found here on BS News. Nicely done Anshel.

Update 2: You cans see it here also, a few seconds after the 2 minute mark.

Editor’s note:  At time of publication Intel had not yet responded to our requests for system specs of the system running the “demo” from backstage,  system specs of the system that the game was originally played and recorded upon or provided us with a full video.  The full video was requested to see if we missed any earlier disclaimers by Mooley Eden that he would show a video of the demo instead of an actual demo as claimed immediately before the “demo”.  We cannot find the disclaimer after the “demo” by Mooley Eden as claimed by Intel PR above.  We have hopes that a longer video will provide additional information.