Stock in the Channel

Checks on Newegg.com have reveled both the HD 6990 and the GTX 590 to be out of stock. Both of these cards represent the the top of the price stack for AMD’s and Nvidia’s GPU line ups. Despite this stock remains strong for graphics card lower down in the price stack. HD 6000 series stock remains strong, with the the recently released HD 6790 making a good showing and Nvidia’s GTX 400 series is still making up a significant portion of their online retail presence.

As you can see  all of these cards are out of stock. Additionally these SKUs are all siting in the astronomically high $700-$750 price point. UPDATE: Since these screen shots were taken one of the GTX 590 SKUs has come back into stock and then in short order listed as out of stock again.

Here at SemiAccurate we’ve decide to take a look at conditions in the channel on a semi-regular basis.

To assess the current condition in the channel we’ve pulled some numbers from online retailer Newegg. What were are doing here is looking at the SKUs that AMD and Nvidia are offering into the channel, analyzing the patterns, and then speculating on the reasons for these patterns.

Let’s take a look at the breakdown of the active SKUs on Newegg by generation. This chart shows AMD based SKUs. 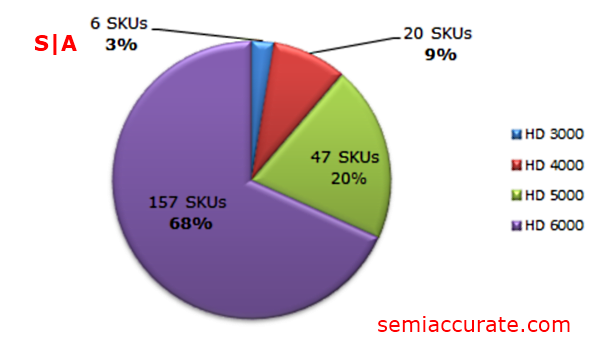 Of the HD 3000 series cards still actively listed the majority of them are HD 3450s. The same pattern is true of the HD 4000 series listings. All of the 4870 SKUs are sold out and the only dual GPU card available from this family is the HD 4670 X2. HD 4350’s represent the majority of the listings from that generation.

Now to the current generation, the HD 6000 is best represented family of graphics cards. Again, the flagship model, the HD 6990 is listed, but out of stock. Although all of the other models are well represented by in stock SKUs. One notable pattern in the HD 6000 series is that the distribution of SKUs is pretty even from the top of the stack down to the entry level models. This is interesting choice by AMD considering all the rumors that are floating around about an impending HD 7000 series launch. *cough CES, cough*

Analyzing this we look to the stock levels of the HD 6000 family, this hints that for the high-end offering, the channel is in a transition period from the current generation to the next generation. The absence of the dual-GPU Radeon HD 6990 graphics card means the screening of Cayman GPUs for making the dual-GPU graphics card has already stopped. So that could mean the second-last batch of Cayman chips from TSMC’s 40 nm lines before the EOL. The unused volumes on the lines will be the space for rebranded GPUs, while APUs will shift to 28 nm on TSMC, soon.

The abundance of the remaining HD 6000 variants indicates the supply is still strong, meaning the transition won’t be taking place in the very near term, that could mean a late Q1, or even early Q2 for the successors to come. 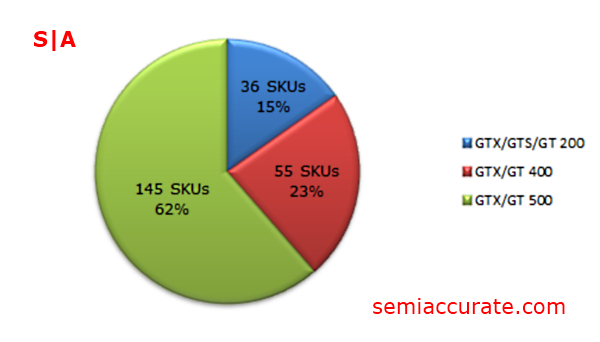 Now Nvidia’s GTX/GTS/GT model prefix can make generation SKU counts difficult. For example if you were to search for the GTX 500 you would end up with results for only the 500 series cards that had the GTX prefix, and not the lower end models the GT 520 or GTS 250. So you’ll have to bear with us as we work around that limitation.

The Geforce 200 series of cards follow the same pattern of SKU distribution as the older generations of AMD cards. Geforce 210’s make up the majority of the SKUs with a single GTS 250 and a single GTX 260 representing the remaining high-end of that product stack.

The Geforce 400 series on the other hand is actually the best represented non-current generation family of graphics cards. GTX 460’s are still in-stock and the split between low-end cards like the GT 420 and GT 430; and mid range cards like the GTX 460 is about 50/50. Notably the GeForce 460 2Win, a dual GTX 460 card, is still available.

The GeForce 500 series is well represented lots of SKUs and strong stock for all of its model with the exception of the GTX 590 which, much like HD 6990 and as we mentioned earlier is out of stock. The very recently launched GTX 560 448-core Limited Edition is already well represented with 7 SKUs that are all in stock.

Analyszing this, the GTX 590 is, literally, a limited edition card; as such it’s not unexpected to see it go out of stock after a short period of time. However, as we look into the distribution, the latest addition, the GTX 560 448-core edition, it is beginning to look like an act to sell as many GF114 GPUs as possible before year-end or the next launch, which is almost inline with some speculations that GK104 will launch in H1 2012.

There is an old saying to the effect that you can’t sell products that you don’t offer, and to that end lets look at volume of SKUs that Nvidia and AMD are bringing to bear. 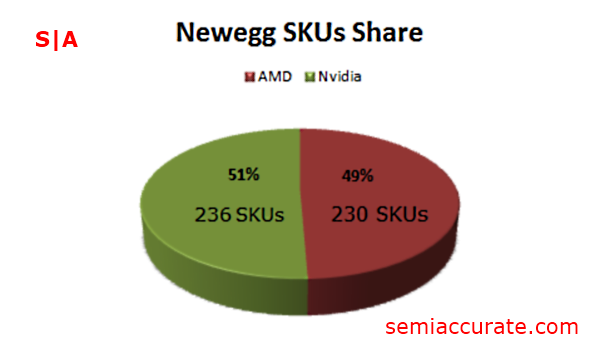 Despite a lack of availability for super high-end graphics cards, the split between AMD’s and Nvidia’s presence in the channel, represented here by the number of SKUs that each company offers on Newegg, is pretty even really. The benefit of this is that consumers have a lot of choice when it comes to graphics cards these days and hopefully this is a trend that will continue into the future.

Now Newegg is only one online retailer in the US, but it has proven to be a good indicator of market conditions in the channel. (Sorry Europe and Asia)

With this in mind we can note a few trends. Nvidia relies on its legacy products to a greater degree than AMD does. Additionally high-end models are far more susceptible to the ails of a short life span than low-end or mid-range cards. Or to put it a different way, the first cards to disappear from the channel are the high-end models of the last generation, and the last models to go are at the bottom of that stack.

We’ll keep monitoring the situation, but if you were one of the unlucky people who had their heart set on getting a high-end dual GPU board this holiday season then your search for a retailer who has one in stock isn’t getting any easier.S|A

Latest posts by Newsdesk (see all)