Trust OCZ (NASDAQ:OCZ) to come out with the high end flash goodies, and this year at Computex they delivered again. That said, it wouldn’t be high end without a few records falling here and there, and that was the case this time too.

All of the SSD goodies OCZ had to show this time around were PCIe based, and all three were on the high end. The first was the RevoDrive 3 X2, something that is 1 better than last year’s RevoDrive X2. This new one is fast, about twice as fast as the older X2, 740/690MBps R/W speeds for that, and the new one is claiming 1.5/1.2GBps for R/W. 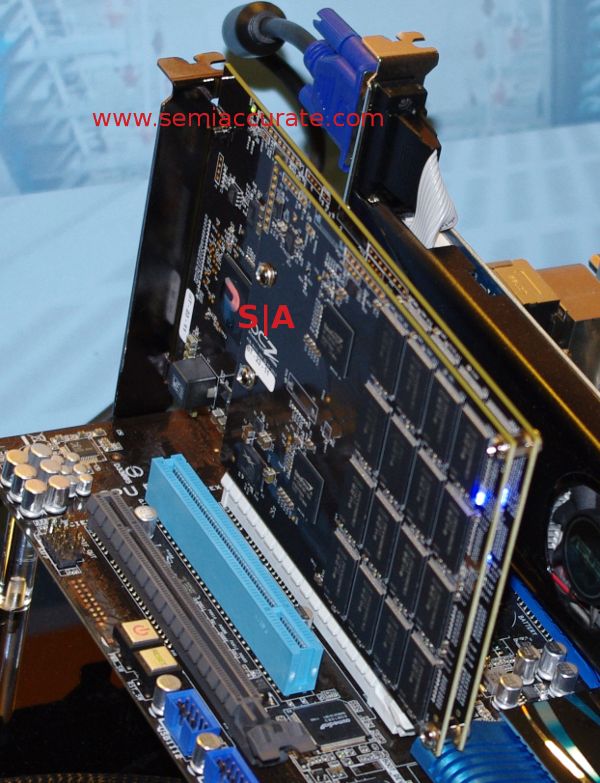 If it sounds like the new version moves from SATA3 to the SandForce SF-2200 SATA6 controller, and is bumping in to the limits of that protocol, you would be right. The RevoDrive 3 X2 uses 4 SandForce controllers like the old, and comes in 240-960GB sizes just like the old one. There is also a half width version, basically without the daughtercard and two controllers. It comes in 120-240GB sizes, and loses half the speed. Our advice, stick with the high end.

Should you want more storage, the RevoDrive Hybrid is the part for you. As is all the rage lately, take an SSD and use it to cache a normal HD, boosting performance. Not to many are bundling both as one unit, Gigabyte comes closest with their latest mobo, but it is not quite the same thing. 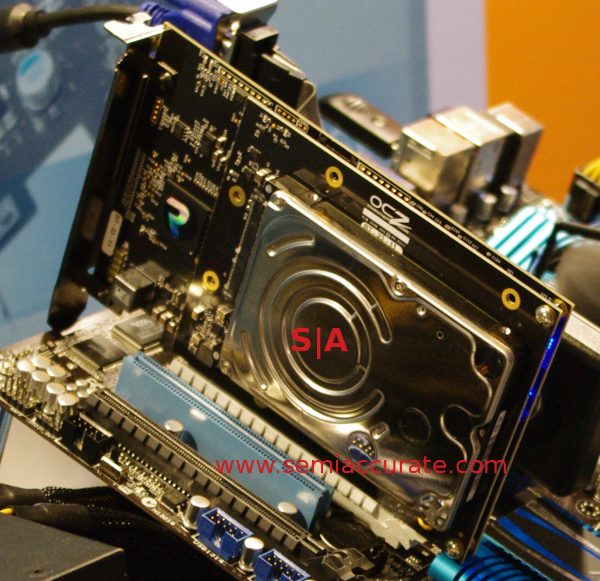 That said, no one is doing it with a PCIe based SSD yet, so the performance is theoretically a lot higher. If it looks like a RevoDrive with the daughtercard removed and replaced with a HD, you are right on, that is exactly what the Hybrid is. Expect it to come in 500G and 1TB sizes with an ~60GB SSD. Now if OCZ would only offer this as an option to all Revos…….

The last one is the fastest, the Z-Drive R4 88. As you can see, the drive gets over 1 million 4K IOPS, a first as far as we know. There have been claims of more than 1 million before, but those were for much smaller block sizes. OCZ wasn’t talking specs on this card, but there are four Sandforce controllers visible, so there are likely 16 of them on this beast.

How fast is it? OCZ claims 2.9/2.7GBps for R/W for the older version, so we expect much more this time around. The R4 88 comes in capacities up to 7.2TB, but don’t expect to get one like that for less than the cost of a car, and not a cheap car at that. That said, if you need this kind of performance and capacity, this drive is probably much cheaper than the alternatives, if there are any.

Last up, we have something that is not an SSD, the new Fatality 1000W PSU. It is 80+ Gold certified, and has 100% Japanese caps. This PSU is a bit of a departure, the Fatality line is usually more of a mid-range consumer part, and this one is pretty high end. Still, a nice Gold certified high wattage PSU is never a bad thing. Buy 8 RevoDrive R4 88s and power them with this, you can’t lose.S|A