Announces two Wi-Fi solutions, doesn’t know how to use Photoshop

WE CAN’T HELP but to be amused by Bigfoot Networks and all of its attempts at selling its various “gaming” NICs into every little niche possible. Now the company has come up with yet another grand plan, wireless “gaming” NICs for notebooks, cause that’s a totally untapped market, right?

What scares us a little bit is that the company actually seems to have managed to sell well enough that a few motherboard makers jumped on the bandwagon and came up with solutions of their own based on Bigfoot Networks Killer NIC design. However, today the company unveiled something a little bit different, in the shape of two Wi-Fi cards that comes with its “Advanced Stream Detect and Visual Bandwidth Control” software. The new cards will, according to Bigfoot Networks, “deliver an optimal experience for online games, HD video and high-quality audio for today’s notebook user.”

The two half-length PCI Express Mini Card solutions from Bigfoot Networks are known as the Killer Wirless-N 1102 and 1103. The 1102 features support for two antennas and speeds of up to 300Mbps whereas the 1103 supports of to three antennas and speeds of up to 450Mbps. Both card support MIMO and the 1102 is a 2T2R solution while the 1103 should be a 3T3R, but might be a 3T2R solution, as Bigfoot Networks doesn’t go into too much technical detail. The good news is that both cards support both the 2.4GHz and 5GHz bands. 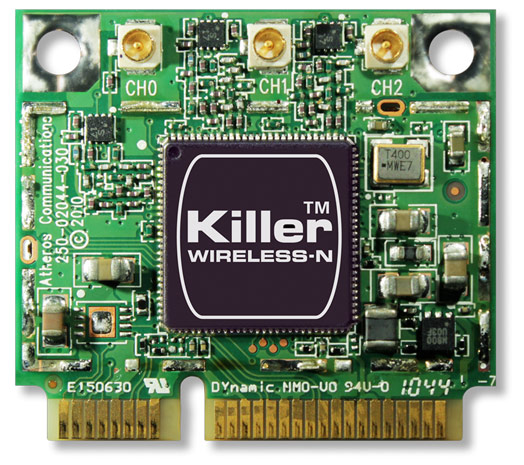 Looking at the picture above you’ll notice that it’s actually an Atheros card that has a Killer Wireless-N logo photoshopped on to it which is really a cheap way of doing things if you want to show off your new gear. In fact, it’s rather embarrassing and even more so when you realize that this most likely isn’t the actual product at all. Doesn’t really instill a lot of confidence in us about what the final product will be like.

That said, Bigfoot Networks is supposed to be demoing its Killer Wireless-N solutions from tomorrow at the GDC Expo in San Francisco, so we should hopefully get some more details with regards to how good or not these products are. Bigfoot Networks has also managed to get a whole bunch of, well, let’s call them boutique notebook makers to sign the dotted line and as such we should see notebooks from AVA Direct, CyberPower, iBuyPower, Maingear, Origin PC, Sager, The V-Machine and Velocity Micro in the US as well as XMG in Europe offering notebooks with Killer Wireless-N cards.

What isn’t known at the moment is when the Killer Wireless-N cards will be available and so far it appears that only the 1102 is available for about a $40 price premium over the regular 802.11b/g/n card you’d get with any old notebook, or about $5 more than upgrading to an Intel Centrino Ultimate-N 6300 card which in fact is on par with the 1103 in terms of features, as this is also a triple antenna 450Mbps MIMO card. Well, we know which one we’d pick and let’s just say that it’s not the one that starts with a K.S|A